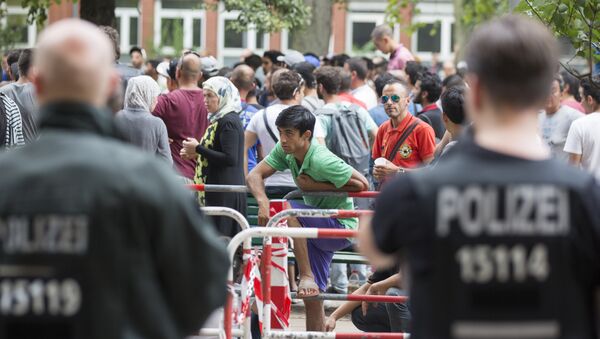 A criminal case has been opened against Diether Dehm, a member of Germany's Left Party, who admitted to the German newspaper Bild am Sonntag that he had smuggled an African refugee from Italy into Germany in the trunk of his car.

Secret Docs Reveal Why Germany is 'Helpless' to Deport Illegal Migrants
Investigators are looking into the details of German MP Diether Dehm, who admitted to a German newspaper that he had illegally brought an African refugee from Italy into Germany in the boot of his car.

On Sunday, Dehm told the Bild am Sonntag newspaper that he had taken the boy to his holiday home on Lake Maggiore in the Italian Alps for a few days before bringing him by car through Switzerland to Germany.

In an interview with Sputnik Germany, Dehm confirmed that he decided to help the boy, who wanted to be reunited with his father living in Germany.

He said that he was very much surprised about the media outcry over the matter and that he does not consider himself a "hero of the movement for refugees."

"When you see a concrete trouble you will not think twice. The refugee I helped is under twenty. He is a smart young man who speaks English and takes an interest in the German Constitution and European music. He promised me that upon getting an education, he would return to his homeland to help restore his country," he said.

Dem said that he does not even want to think about what would have happened to this young man if he had failed to give him a helping hand.

"You see, I have two children and if I knew my son was somewhere lingering, [living] out his days somewhere, I would have dug a tunnel and pulled him out," he said.

"Of course," he said, "they are not to blame for it. But we, the Left Party politicians, should be interested in the economic revival in those countries."

He added that he wished he could take ten billion euros from the military budget and inject into developing countries so as to prevent highly educated people from leaving their home countries.

Dehm said that he is not worried about the imminent legal consequences of his action, saying that he is waiting for explanations from prosecutors and police "who said yesterday that they had opened a criminal case against me." He said he'd taken the right path when he brought the young man to Germany.

"I want to protect our Constitution which declares, in particular, that human dignity is inviolable, namely, the dignity of a person, not that of Germans. This is the most important thing. If they want to open a criminal case against this principle – оkay," he said.

In late August, a study issued by the Nuremberg-based Institute for Employment Research (IAB) indicated that up to 400,000 refugees may arrive in Germany before the end of 2016 if the political situation remains unchanged.

Merkel 'Fed up With Erdogan Blackmailing Germany' With Refugee Deal
According to the research, about 70 percent of the migrants and refugees are looking for work, and almost a third of those who have already found employment do not have a professional qualification.

The EU border agency Frontex detected over 1.83 million illegal border crossings in 2015, in contrast to some 283,000 in 2014. Of these, more than 1 million net arrivals streamed into Germany, according to the German Federal Statistical Office.