Merkel, Hollande Use Brexit as Chance to Unify EU's Military 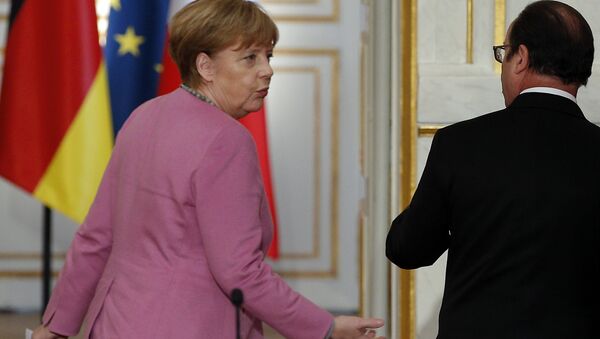 The reforms proposed by the two countries focus, first and foremost, on the creation of a joint European Army, German newspaper Sueddeutsche Zeitung reported.

On the eve of the upcoming EU summit, the governments of both countries have made the EU members a far-reaching proposal, providing for the establishment of a "joint and permanent EU military headquarters," joint reconnaissance missions with the help of European satellites, creation of common Medical and Logistics Command as well as the synchronization of financing and military planning.

Hollande Steps Up Calls for European Army Amid Terror Alerts
A corresponding six-page paper jointly developed by German Minister of Defense Ursula von der Leyen and French Minister of Defense Jean-Yves Le Drian has been already sent to the EU members before the informal summit in Bratislava on Thursday and is expected to be discussed and approved during the meeting.

According to the German newspaper, which gained access to the document, Chancellor Angela Merkel and French President François Hollande apparently seek to demonstrate their leading role in the EU and enhance what the document called "corporate spirit" following the decision of the United Kingdom to leave the Union.

Earlier, many projects in the defense field were on hold because of Britain's constant vetoes. Without London, the two states — France and Germany — hope for swift decisions, the newspaper noted.

The new potential defense plan is expected to bring such countries as France, Germany, Italy, Spain and Poland to create permanent military structures that will act on behalf of the EU. It could also include an EU military planning and operations center in Brussels, which, as some experts say, may eventually result in the rise of an EU-led rival to NATO.