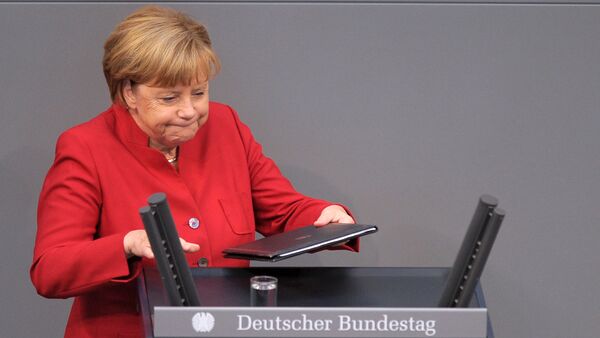 Even after her party suffered a humiliating defeat during the recent state elections in Mecklenburg-Western Pomerania, when many conservative voters decamped for the right-wing Eurosceptic Alternative for Germany (AfD), Angela Merkel still appears reluctant to abandon her migration policy.

A Chancellor's Choice: Merkel Faces Two 'Emergency Options'
While Merkel continues to hope that her plans will succeed, it appears that the chancellor has expended most of her "political credit" and will be forced to watch as her "empire falls apart", according to Frankfurter Algemeine Zeitung.

During elections in Mecklenburg-Western Pomerania, AfD, a three-year-old party which vehemently opposes any attempts to allow migrants into the country, came in second, securing about 20.8 percent of votes while Merkel’s Christian Democratic Union attracted only 19 percent.

"Twenty percent (of votes) in the northeast obviously don’t equal twenty percent in the entire country. But it’s clearly a sign of a growing opposition to a policy Merkel sticks to despite this humiliating defeat," the newspaper remarks.

It appears that numerous Germans who turned their backs on the CDU and chose to support other political parties, don’t think that a move like accepting hundreds of thousands of migrants into the country has no alternative, as Chancellor Merkel claims.

Furthermore, it seems that many Christian Democratic Union and Christian Social Union supporters no longer believe that Germany’s future is in good hands under Merkel’s stewardship, and so far the chancellor has been unable to gain back their trust, the newspaper surmises.