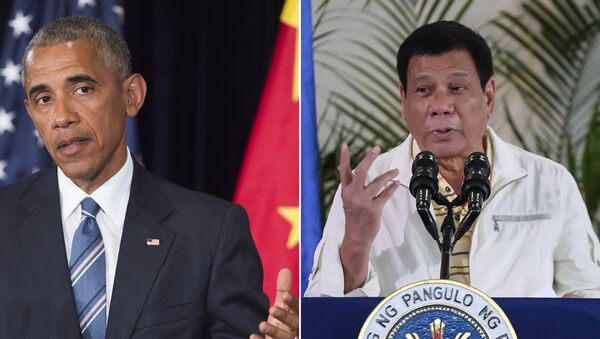 Philippines Leader Duterte Blasts Obama’s Meddling, Calls Him a ‘Son of a B----‘
As the G20 summit in China ended on Monday, Philippines President Rodrigo Duterte insulted his US counterpart, warning him to stop criticizing his country for extrajudicial killings as part of the Filipino war against drug cartels and terrorist organizations.

"I am a president of a sovereign state and we have long ceased to be a colony. I do not have any master except for the Filipino people, nobody but nobody," said Duterte. "You must be respectful. Do not just throw questions. Putang ina I will swear at you in that (G20) forum," he said using the Tagalong term for "son of a bitch."

Obama called the comments "colorful," and reacted by canceling a scheduled meeting between the two leaders before the ASEAN summit in Laos this week.

Aleksey Fenenko, an associate professor of International Relations at Moscow State University told Sputnik that the exchange will have only a superficial effect on relations there.

"It will affect the atmosphere, but no more than that. There won't yet be any real consequences for Philippines-US relations. The Philippines hasn't raised the issue of the 2014 military agreement which allows the deployment of more US troops in the Philippines," said Fenenko, who believes that the two countries feel they stand to lose much if their relationship sours.

"The US is the Philippines only guarantee of security in its relations with China and the South China Sea. And the Philippines is a key strategic position in the center of the Pacific Ocean. I don't think there can be a real conflict here between Manila and Washington."

Obama Crashes G20 by Warning Beijing of ‘Consequences’ in the South China Sea
However, Yang Mian of the Chinese Media Institute's Center for International Relations thinks the consequences of the spat could be far-reaching.

"This is a diplomatic incident between two countries. On the one hand, Obama is a head of state and this is intolerable for someone with his authority. On the other hand, the US often gives the Philippines a reason to feel discontent because it believes that the US is trying to take control of the Philippines," he told Sputnik.

"From the US point of view and from the point of view of diplomatic etiquette, measures could also be taken to lower the level of US-Philippine relations. In any case, there can't be any consultation between the two countries now, the incident could also have an impact on cooperation," Yang Mian said.

Grigoriy Lokshin of Russia's RAS Institute of Far Eastern Studies told Sputnik that Duterte's outburst was provoked in part by political differences with the US regarding the Philippines' South China Sea dispute with China.

"This is connected with the political course that Duterte is taking. After all, he is trying to find some opportunities and to negotiate with China," Lokshim said.

"From this point of view, it is a step in the direction of China, to try and find an agreement somehow. I would not dare to predict whether it will be possible to change the nature of relations between the two countries, because China is unlikely to change its position on the South China Sea." 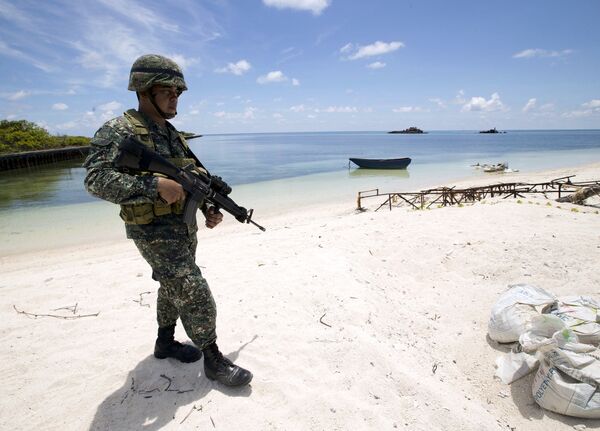 A Filipino soldier patrols at the shore of Pagasa island (Thitu Island) in the Spratly group of islands in the South China Sea, west of Palawan, Philippines, May 11, 2015.
© REUTERS / Ritchie B. Tongo
The outburst directed at Obama is not the first time Duterte has insulted other public figures. In May, he called Pope Francis a "son of a whore" after the pontiff's visit to Manila created traffic jams.

He also called US ambassador to the Philippines Philip Goldberg a "gay son of a whore" in August, after he criticized remarks Duterte made about sexual violence.

Last month he threatened to "separate" from the UN after it criticized his war on drugs as a crime under international law.

"Why do you have to listen to this stupid?" said Duterte, after UN human rights experts called on Duterte to stop extra-judicial executions and killings of hundreds of suspected drug traffickers.

Philippines Threaten 'Bloody Confrontation' with Beijing Over South China Sea
However, Duterte remains popular and maintains an approval rating of over 90 percent in the Philippines, where took office in June this year.

Duterte backpedaled somewhat after insulting Obama, and expressed "regret it came across as a personal attack on the US President."

"Our primary intention is to chart an independent foreign policy while promoting closer ties with all nations, especially the US with which we had had a longstanding partnership," he stated.

The US and the Philippines, which signed a Mutual Defense Treaty in 1951, have traditionally been staunch allies. The US supported the Philippines' decision to take the South China Sea dispute with China to The Hague Permanent Court of Arbitration, which ruled in Manila's favor in July.