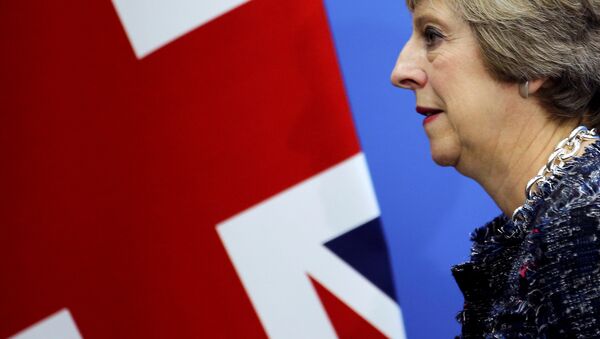 © REUTERS / Damir Sagolj
Subscribe
Britain's Prime Minister Theresa May is talking tough on UK immigration following accusations she was taking too much of a "soft" approach after dismissing Foreign Secretary Boris Johnson's plan for an Australian-style points system.

May said the system proposed by Johnson, who campaigned hard to leave the European Union, was no "silver bullet." Instead, the former home secretary is considering blocking all EU migrants from entering the UK unless they have a job.

This, according to Mrs. May is how she anticipates regaining "control" of Britain's immigration system.

"What the British people voted for on the 23rd June was to bring some control into the movement of people from the European Union to the UK. A points-based system does not give you that control," she said during a speech at the G20 Summit in China…[it] means people come in automatically if they just meet the criteria," Mrs. May said.

Mrs. May instead wants the government to decide who comes into the country — not a points system.

However, government critic and staunch "Vote Leave" campaigner Nigel Farage suggested that "watering down" any immigration system "will lead to real anger."

Theresa May's track record on immigration as Home Secretary was appalling. Her comments rejecting an Australian-style points system worry me

​"The people were clear in wanting a points-based immigration system, which is why so many went out and voted to leave the European Union. Any watering down from that will lead to real anger," the PM added.

Brexit is a Chance to Take Back Control of Our Democracy - Ex-London Mayor
The vote to leave the European Union has been widely associated with Britain "taking back control," however the UK government remains unclear about what it really means to take back control.

For many Brexiteers, taking back control means a stricter immigration system and it was with such anti-migrant rhetoric that thrust the Leave campaign into the lead, led by politicians including Nigel Farage and Boris Johnson, both purporting the Australian based points system.

Farage xenophobia,bogus claims about “sovereignty”, and ill-judged bleating about “Brussels”,Johnson lies got us into the Brexit mess.

​However Prime Minster Theresa May, who campaigned to remain in the European Union has distanced herself from the points system, saying it should be for the government, not a set of criteria, to decide who comes in or out of the UK.

Needless to say — as Home Secretary — Theresa May wanted "to create a hostile environment" for illegal immigrants which included landlords checking passports and immigration status of all prospective tenants, and "Go Home" vans which were driven around the country.

Before there was Nigel Farage's 'Breaking Point' poster there was this from Theresa May #Brexit pic.twitter.com/G3fzm8dVa0

Massive Migrant Rescue Operations Closing in on Libya
​As Home Secretary, May also refused to take part in any EU relocation or resettlement scheme for refugees and encouraged the removal of the UKs support for naval search and rescue operations on the Mediterranean Sea suggesting it encouraged other migrants to make the journey.

Speaking recently in the House of Commons, David Davis MP said the government's post-Brexit immigration system would be "more rigorous" than a points-based system.

​However, it remains to be seen what "taking back control" really means?

#Immigration. I don't care if we have points system. Migration Watch say there are better ways.
I just want the #UK to have control, not #EU