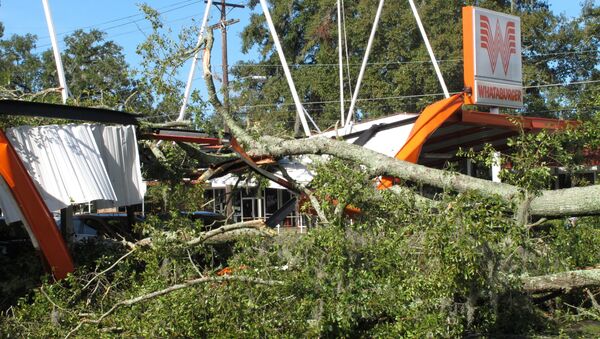 © AP Photo / Brendan Farrington
Subscribe
International
India
Africa
The hurricane may have been downgraded to a tropical storm, but it has already left one dead as winds reached speeds of up to 80 PMH, and is now about to begin hammering Georgia and the Carolinas.

Hermine was downgraded on early Friday morning as winds decreased to around 50 mph. Parts of Florida were drenched with five inches of rain and 70,000 homes lost power in Tallahassee and along the coast.

A Florida man sleeping in a tent in Marion County was killed when a tree fell on him. No other fatalities have yet been reported, but several others were injured as trees fell on houses.

The storm downed powerlines and many trees, including one near the governor’s mansion, as well as large pools of standing water on flooded roads.

​Scott urged residents to dump standing water near their homes to prevent mosquitoes, which may be carrying the Zika virus, from breeding.

The storm is now moving inland through Georgia and is expected to reach the Carolinas on Friday evening.

It is then expected to move north along the coastal regions of the Atlantic, bringing flooding and persistent high surf to areas from the Carolinas to Massachusetts.