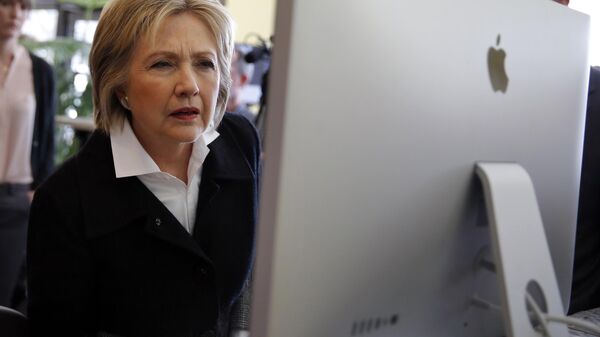 © REUTERS / Carlos Barria
Subscribe
International
India
Africa
The answers the Federal Bureau of Investigation (FBI) received from Hillary Clinton during the criminal investigation into her use of private server for official business are outrageous, US Republican presidential nominee Donald Trump said in a statement.

WASHINGTON (Sputnik) — Earlier on Friday, the FBI released a report on its criminal investigation into whether Clinton intended to violate US laws by using a private server and email account during her tenure as secretary of state from 2009 to 2013.

The notes of the FBI interview with Clinton reveal she could not give an example of how classification of a document was determined and could not recall receiving any emails she thought should not be on an unclassified system.

FBI Report on Clinton Emails Reinforces Her Dishonesty - Trump Campaign
The FBI report states Clinton said she never deleted nor instructed anyone to delete her emails to avoid complying with the US Federal Records Act, Freedom of Information Act (FOIA) or State Department or FBI requests for information. Clinton had erased 33,000 emails that she claimed were personal. Moreover, the FBI report confirmed that hostile foreign actors gained access to Clinton’s emails through accounts of people she corresponded with.

Trump noted his shock in seeing how Clinton’s answers to the FBI differed from what Clinton has said in public.

"After reading these documents, I really don't understand how she was able to get away from prosecution."

In July, FBI Director James Comey described Clinton’s use of the private email server for official business as the US top diplomat as extremely careless, but did not recommend criminal charges against her.