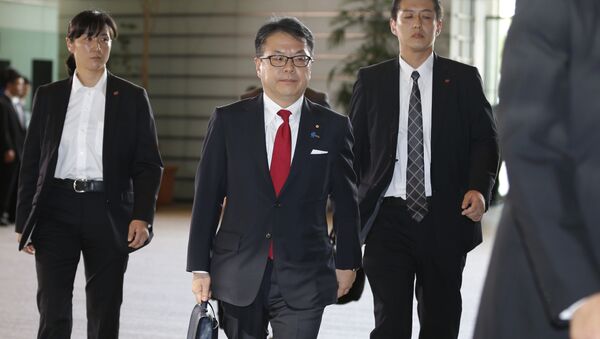 BRICS Bank Hopes to Meet Partners, Find Promising Projects at EEF Forum
Hiroshige Seko will take up this position, while at the same time remaining the Minister of Economy, Trade and Industry. The move is aimed at improving bilateral economic relations.

Russian President Vladimir Putin and Japan's Prime Minister Shinzo Abe will meet on September 2 on the sidelines of the Second Eastern Economic Forum (EEF) in Vladivostok. According to the publication, Abe plans to discuss with the Russian leader the launch of negotiations for a peace treaty between the two countries.

On August 30, Russian Presidential Aide Yuri Ushakov stated that Moscow passed the Japanese side the cooperation development plan consisting of 49 points. According to him, the initiatives will be discussed at the meeting of Putin and Abe at the EEF.

Domo Arigato Mr. Abe: Why Japan is Backing Away From the Kuril Dispute
In late May, Russian Foreign Minister Sergei Lavrov assured that Moscow still adheres to the keeping of the Kuril Islands. "We won't give the Kuril Islands and we won't beg Japan for a peace agreement," he said.

Earlier the same month, Abe offered the Kremlin a new approach to solving the problem of the Kuril Islands. The details of this approach were not disclosed, but it was reported that the plan to promote relations between the two countries included eight points.

In 1956, Moscow and Tokyo signed a Declaration ending the war, which can only come into force after the conclusion of a peace treaty. The main obstacle to the signing of the memorandum is the unresolved dispute over the Kuril Islands. Japan made a claim for the four islands, referring to the Treaty of 1855. Russia insists that the territory became part of the Soviet Union following World War II.