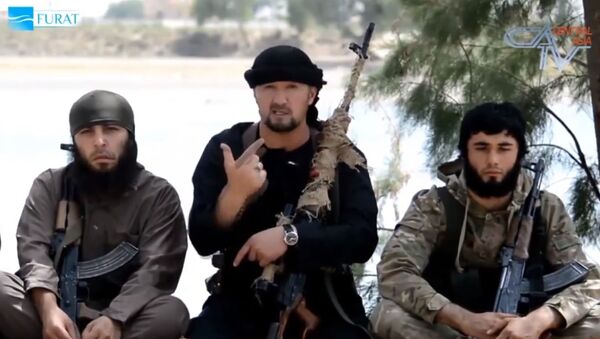 © Photo : Youtube / CATV NEWS
Subscribe
The US State Department has offered a $3 million reward for any information leading to the arrest of Gulmurod Khalimov, a former Tajik police commander who is currently one of the main leaders of the Daesh terrorist group. While the press release labels him as a terrorist, it fails to mention that it was the US who actually trained him.

“The US Department of State’s Rewards for Justice Program is offering a reward of up to $3 million for information leading to the location, arrest, and/or conviction of Gulmurod Khalimov (variant Halimov), a key leader of the terrorist group ISIL, also known in Arabic as Da’esh,” says the press release posted on the department’s website on Tuesday.

US Offers $3Mln Reward for Leads on Daesh Leader Gulmurod Khalimov
The document also says that Khalimov is a former Tajik special operations colonel, police commander, and military sniper. He was the commander of a police special operations unit in the Ministry of Interior of Tajikistan, or OMON, used against militants in the Central Asian nation.

“He is now an ISIL member and recruiter. In May 2015, he announced in a 10-minute propaganda video that he fights for ISIL and has called publicly for violent acts against the United States, Russia, and Tajikistan,” the press release says.

The document however does not mention that the person whom it designates as a Specially Designated Global Terrorist had undergone training on US soil.

In the same very video where he is sitting against a backdrop of palm trees, brandishing a gun and surrounded by bearded, armed men, Khalimov reveals that he had spent years at US military training bases.

​“In 2003, I went to Baton Rouge in Louisiana, to undergo special training with the US Special Forces,” the man says.

“In 2008, I also underwent special training, again at Baton Rouge,” he continues.

“From 2003 to 2008, I had special training in America at a Blackwater military base,” he further reveals, adding that there they were trained to fight against Muslims and Islam.

Back in 2015, RT news channel contacted the US institutions involved in his training for information.

The US training organization The Academy, which is the current owner of the facilities where Khalimov was taught, answered that they did everything “with the explicit approval of the appropriate US Government department or agency.”

The Pentagon then responded that “the individual services would track foreign military personnel, who have received training”, and advised the channel to contact them.

According to the US media, the State Department has confirmed this claim.

"From 2003-2014 Colonel Khalimov participated in five counterterrorism training courses in the United States and in Tajikistan, through the Department of State's Diplomatic Security/Anti-Terrorism Assistance program," said spokeswoman Pooja Jhunjhunwala.

The program is intended to train candidates from participating countries in the latest counterterrorism tactics, so they can fight the very kind of militants that Khalimov has now joined.

Long before his training in the US, Khalimov also claimed that he underwent training with the Russian Special Forces, back in 1997.

Several months after the release of the video, in September 2015 the US Department of State designated Khalimov as a Specially Designated Global Terrorist under Executive Order 13224.

000000
Popular comments
Russia should capture him to get all info.
cast235
31 August 2016, 15:53 GMT2
000000
My country don't pretend to not knowing those individuals were going back there in the thousands. My small photo studio business pick up a lot. They came to take picture with females friends in the hundreds and straight telling that that they are returning home and may not coming back. Busy such that for at least two years and our government now said they didn't know a thing about it? Initial thought was those guys got blessing by our government
peaceactivist2
31 August 2016, 16:26 GMT1
000000
Newsfeed
0
New firstOld first
loader
LIVE
Заголовок открываемого материала
Access to the chat has been blocked for violating the rules . You will be able to participate again through:∞. If you do not agree with the blocking, please use the feedback form
The discussion is closed. You can participate in the discussion within 24 hours after the publication of the article.
To participate in the discussion
log in or register
loader
Chats
Заголовок открываемого материала
Worldwide
InternationalEnglishEnglishMundoEspañolSpanish
Europe
DeutschlandDeutschGermanFranceFrançaisFrenchΕλλάδαΕλληνικάGreekItaliaItalianoItalianČeská republikaČeštinaCzechPolskaPolskiPolishСрбиjаСрпскиSerbianLatvijaLatviešuLatvianLietuvaLietuviųLithuanianMoldovaMoldoveneascăMoldavianБеларусьБеларускiBelarusian
Transcaucasia
ԱրմենիաՀայերենArmenianАҧсныАҧсышәалаAbkhazХуссар ИрыстонИронауОssetianსაქართველოქართულიGeorgianAzərbaycanАzərbaycancaAzerbaijani
Middle East
Sputnik عربيArabicArabicTürkiyeTürkçeTurkishSputnik ایرانPersianPersianSputnik افغانستانDariDari
Central Asia
ҚазақстанҚазақ тіліKazakhКыргызстанКыргызчаKyrgyzOʻzbekistonЎзбекчаUzbekТоҷикистонТоҷикӣTajik
East & Southeast Asia
Việt NamTiếng ViệtVietnamese日本日本語Japanese中国中文Chinese
South America
BrasilPortuguêsPortuguese
NewsfeedBreaking
11:57 GMTBiden Plans to Bring Up 'Democratic Recession' at His 'Summit for Democracy'
11:49 GMTUK Labour Party Records Largest Lead Over Ruling Conservatives Since 2019, Poll Shows
11:40 GMTNew Zealand Parliament Passes Bill Easing Change of Sex on Birth Certificates
11:25 GMTREC Will Present Exoskeletons, Robots and Drones at Expo 2020 in Dubai
10:59 GMTUS Misleads Public on Progress in Resolving Diplomatic Crisis With Russia, Moscow Says
10:35 GMTEuropean Union Establishes Asylum Agency
10:33 GMTPiers Morgan Tells 'Cringe-Making' Hillary Clinton to 'Let It Go!' After 2016 Trump Loss Meltdown
10:31 GMTFrench Military Reports Second ‘Interaction’ Between Russian Jets & French Aircraft Over Black Sea
10:30 GMTWhat Cost Virat Kohli the Captaincy of India's One-Day International Cricket Team?
10:29 GMTInstagram to Bring Back Chronological Feed in First Quarter of 2022
10:26 GMTUK Could Hit 1Mln Omicron Cases by Month's End, Health Minister Says
10:20 GMTSpaceX Announces Putting NASA's Space Observatory Into Orbit
10:10 GMTBoris Johnson and His Wife Carrie Announce Birth of Baby Girl
09:57 GMTNew Zealand Adopts Plan to Become Smoke-Free by 2025
09:45 GMTIraqi Security Advisor Claims International Coalition Withdrawing Troops as 'Combat Mission Ends'
09:33 GMTRussian Chief of General Staff Slams Reports About 'Imminent Invasion of Ukraine' as Fake
09:30 GMTArmenia Says Border Positions Attacked by Azerbaijan Military Forces Overnight
09:25 GMTTulsi Gabbard Warns Against Igniting World War III as US Senator Hints at Nuking Russia Over Ukraine
09:13 GMT'Nude & Pregnant' Maxwell Photo at Epstein's Home Prompts Love Child Speculations
09:11 GMTIndian Farmers End Year-Long Protest as Government Promises to Meet Their Demands