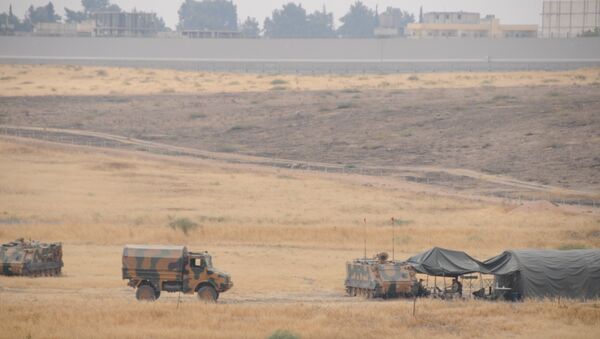 "The United States most likely gave the go-ahead to Kurds to create their territorial entity. Ankara understands than sooner or later this entity would expand into Turkish territory. So, Turkish troops entered Syria to prevent a Kurdish belt from Afrin to Al-Qamishli," Hasan, who is retired Brigadier General of the Syrian Army, told the Russian newspaper Izvestia.

Turkish Army Destroys Kurdish Militia Group Near Syria's Jarablus
The expert underscored that the Jarablus operation is a violation of Syria’s sovereignty.

The operation backed by a US-led coalition started on August 24. On the next day, it was reported that Turkish forces took control over Jarablus. According to Turkish media, the operation in Jarablus will last for two weeks.

According to Leonid Isayev, lecturer at the Higher School of Economics, Turkish forces will further advance on the town of al-Bab, on which Kurdish forces have recently set their sight.

"When the Kurdish Democratic Forces destroyed Daesh militants in Manbij they started to advance on al-Bab and further to a Kurdish enclave near Afrin. Thus, Kurds want to create a Kurdish belt along the Turkish-Syrian border. Ankara responded with an operation in Jarablus. The next step could be operation in al-Bab, in order to prevent Kurds in northeast to join Kurds in northwest," Isayev suggested.

What’s Behind US Support for Turkish Military Operation in Jarablus
The Turkish operation in Jarablus is aimed at preventing a united Kurdish region in Syria and fighting Daesh was used only as a pretext, French author and lecturer Gerard Chaliand said in an interview with Le Figaro.

"Turkey started an operation in Syria to stop Kurds and, to a lesser degree, to fight Daesh. Turkey will never allow a united Kurdish territory to take shape in Syria," he said.

He also suggested that Moscow might have been aware of the Jarablus operation.

"Until recently, Ankara didn’t want to go into Syria because of the Russian presence. But after talks between Turkish President Recep Tayyip Erdogan and Russian leader Vladimir Putin, Moscow agreed not to bomb Turkish forces. In exchange, Erdogan admitted that Bashar Assad will remain in power, at least for now. Such a situation is good for Moscow, Ankara and Damascus," Chaliand pointed out.

Expert on Syria Günter Meyer noted that both Daesh and Kurdish forces are considered terrorists by Turkey.

"The primary goal of the Turkish operation is Kurds. Ankara wants to prevent a Kurdish autonomous entity at the Turkish border. Daesh is a secondary target," the analyst said in an interview with the Swiss newspaper Tagesanzeiger.

Mikhas
26 August 2016, 19:57 GMT1
000000
Putting and end to the idea of a Kurdish State (Rojava) is the main end of the operation. Regional powers can all agree that they don't want the Kurdish separatist.