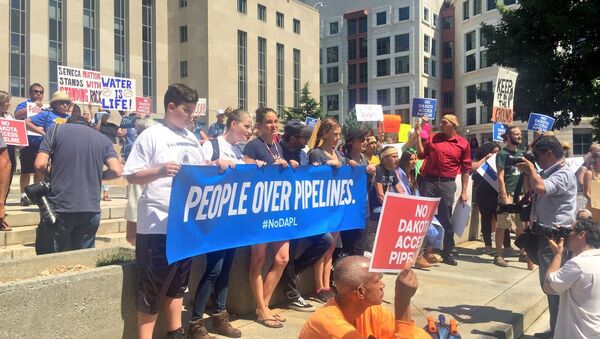 © Sputnik / Cassandra Fairbanks
Subscribe
No decision was made on Wednesday as to whether there will be an injunction on the construction of the Dakota Access Pipeline, as hundreds gathered in protest outside a Washington DC courtroom and in North Dakota.

As the injunction hearing took place, protesters, including actresses Shailene Woodley and Susan Sarandon, rallied outside the US District Court in Washington DC. Simultaneously in North Dakota, hundreds more marched across the 2,370-foot-long Veterans Memorial Bridge in Bismarck.

Native American Activists Successfully Hold Off North Dakota Pipeline
Both demonstrations were in solidarity with approximately 2,000 indigenous protesters from more than 45 tribes who are encamped on the Standing Rock Sioux Reservation near the pipeline construction site.

The Standing Rock Sioux tribe, represented by the environmental law group Earthjustice, is currently suing Dakota Access, asserting that the US Army Corps of Engineers did not conduct a thorough survey of the pipeline’s environmental impact. The pipeline will transport some 450,000 barrels of oil per day across the Missouri River.

Opponents observe that a leak would contaminate the water supply of millions of people.

In an earlier protest against the potentially catastrophic pipeline, indigenous youth took to the streets, running 500 miles from Cannonball, North Dakota, to the district office of the United States Army Corps of Engineers in Omaha, Nebraska.

While the pipeline was approved, over 35 youth ran 2,000 miles to DC, to rally on the steps of the US District Court.

The speakers at the event included the youth runners themselves, and tribal leaders, elders, and celebrities.

US Farmers Seek Court Order Blocking Massive Dig on Property for Bakken Pipeline
“As a mother and a grandmother I am here to thank the Standing Rock community and all the other indigenous people that have come forward to make this space for us to make a statement in saving their water to save ours,” film star and activist Sarandon said during her speech at the DC event.

“I’m here to say that I will do everything that I can to stand in solidarity with these people,” Sarandon stated.

Sarandon acknowledged that activists were “so relieved” to see the Democratic platform potentially contain anti-fracking policies, only to be disappointed as it was ripped away as their nominee Hillary Clinton’s appointees rejected numerous proposals put forth by Sanders supporters.

Speaking to reporters after the speech, Sarandon laughed when she was asked if she would vote for Republican candidate Donald Trump, asserting that she would not. When asked who she will be supporting, she maintained that she has still not been convinced by any candidate. She did, however, urge people to vote in the midterm elections for progressive representatives.

"To the vehicles marked homeland security — WE are homeland security, and we are here to protect our water,” one indigenous speaker asserted, motioning toward the many Department of Homeland Security vehicles parked nearby the rally.

Keystone Oil Pipeline Leak Volume Surpasses 60,000 Liters
Woodley, a US actress starring in the soon-to-be released Snowden film, has spent months campaigning against the pipeline, as well as spending two weeks camping out in solidarity at the Standing Rock Sioux Reservation. At the rally, she gave an impassioned plea for people to get involved in the effort to protect water sources in the country.

“Eighteen million people in our country depend on the Missouri River for drinking water and for tap water. When you turn on your faucet, most of us don’t think about where that water comes from. Chances are likely that at least a few of us here depend on the Missouri River for our water,” Woodley said. “What happens when gallons of crude oil contaminates water like that? It destroys our water. It destroys our future generations.”

“Every single time we allow a pipeline to be built — whether it’s the Dakota Access Pipeline, the pipelines that are going through West Texas, the pipelines that are in Florida — all over our country, every time we the people allow that to happen we are endorsing the fossil fuel industry,” Woodley said. “When we stand in front of those pipelines and we stand with our brothers and sisters, and we say ‘I stand in solidarity with you,’ that sends a message out that we are ready for renewable energy and that we will not stop until we have renewable energy. It’s time.”

Woodley also firmly refuted rumors in mainstream media of violence on the Standing Rock Sioux Reservation encampment, as they are absolutely false. She reiterated that she spent the last two weeks peacefully camping in solidarity with the pipeline protest.

“The only pipes that are there are the sacred pipes, that they pray with,” Woodley stated, referring to North Dakota Governor Jack Dalrymple’s claim that protesters had pipe bombs.

On Wednesday afternoon, a judge rescheduled the injunction hearing for September 14, claiming that it was necessary to have “time to think.”

000000
Popular comments
Well they are not smiling, showing their teeth, there is business going on. Such a cover up BS is just for the phony Americans. Hated more for each day. If they could just understand how hated they are. Curse on them forever. www.rt.com/usa/357052-dakota-pipeline-protest-celebrities
ptcjm
25 August 2016, 00:49 GMT1
000000
The Sputnik editorial will absolutely help the American Jews and even Clinton to participate in polluting all water. Do not forget to show your teeth, smiling hilariously like Clinton. And if that's not working, you might need to visit the butcher of Israel in Moscow on his regular visits.
ptcjm
25 August 2016, 00:00 GMT
000000
Newsfeed
0
New firstOld first
loader
LIVE
Заголовок открываемого материала
Access to the chat has been blocked for violating the rules . You will be able to participate again through:∞. If you do not agree with the blocking, please use the feedback form
The discussion is closed. You can participate in the discussion within 24 hours after the publication of the article.
To participate in the discussion
log in or register
loader
Chats
Заголовок открываемого материала
Worldwide
InternationalEnglishEnglishMundoEspañolSpanish
Europe
DeutschlandDeutschGermanFranceFrançaisFrenchΕλλάδαΕλληνικάGreekItaliaItalianoItalianČeská republikaČeštinaCzechPolskaPolskiPolishСрбиjаСрпскиSerbianLatvijaLatviešuLatvianLietuvaLietuviųLithuanianMoldovaMoldoveneascăMoldavianБеларусьБеларускiBelarusian
Transcaucasia
ԱրմենիաՀայերենArmenianАҧсныАҧсышәалаAbkhazХуссар ИрыстонИронауОssetianსაქართველოქართულიGeorgianAzərbaycanАzərbaycancaAzerbaijani
Middle East
Sputnik عربيArabicArabicTürkiyeTürkçeTurkishSputnik ایرانPersianPersianSputnik افغانستانDariDari
Central Asia
ҚазақстанҚазақ тіліKazakhКыргызстанКыргызчаKyrgyzOʻzbekistonЎзбекчаUzbekТоҷикистонТоҷикӣTajik
East & Southeast Asia
Việt NamTiếng ViệtVietnamese日本日本語Japanese俄罗斯卫星通讯社中文（简体）Chinese (simplified)俄罗斯卫星通讯社中文（繁体）Chinese (traditional)
South America
BrasilPortuguêsPortuguese
NewsfeedBreaking
15:25 GMTTaliban Plans to Form Commission in 2022 to Draft New Constitution
15:22 GMTWatch Fuego Volcano Erupt in Guatemala, Spewing Out Vast Amounts of Smoke and Lava
15:17 GMTRussian Officials Assess Proposal to Populate Siberia With 'Resurrected' Woolly Mammoths
15:13 GMTParis to Bill Canberra for Cancellation of Submarine Deal After AUKUS Pact
14:51 GMT'Britney VS Spears': Pop Star's Fiancé Accuses Docu Makers of Earning Profit From Her Story
14:41 GMTRussian Union of Journalists Chief Slams 'Unacceptable' US Sanctions Against Colleagues
14:31 GMTUS Investment Firm Purchases Italy's Oldest Football Team
14:29 GMTUS to Find Ways to Get More Help to Haitian Migrants After US Envoy Resigned, State Dept. Says
14:25 GMTAnthony Joshua Says He Would ‘Fight King Kong' if He Had to as He Defends Titles Against Usyk
14:18 GMTFormer Nazi Helmut Oberlander Dies in Canada Before He Could Be Deported, Reports Say
14:07 GMTWhat's Behind Africa's Increasing Drive to Launch Satellites?
14:06 GMTExpo 2020 in Dubai Set to Boost Economic Development in Arab World, Organiser Says
13:58 GMTTwo Afghan Evacuees Charged With Sexual, Physical Assault in US, Justice Department Says
13:51 GMTBritish Government Preparing for 'Worst-Case Scenario' of Gas Prices, Says MP
13:43 GMTOutrage as Missouri High School Students Reportedly Come Up With Petition to Reinstate Slavery
13:42 GMTEC Does Not Expect Increase in Smartphone Prices Over Universal Charging Port Regulation
13:26 GMTAmericans Favour Trump Over Biden After Afghanistan Pullout Disaster, Poll Says
13:25 GMTComputer Game to Measure Children's Mental Development Launched by MSUPE
13:21 GMTDay 3 of 76th Session of UN General Assembly
13:18 GMTRoscosmos Starts Preparations for Landing First Russian Cosmonaut on Moon