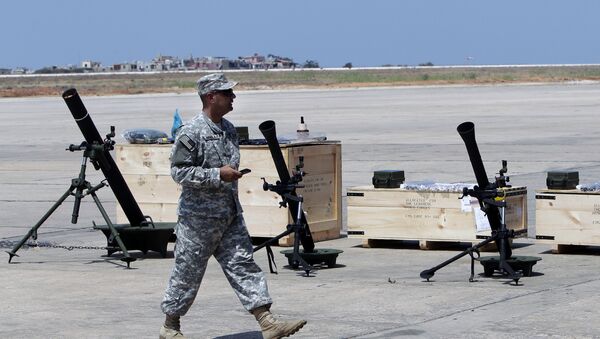 The Ukrainian proposal to co-produce lethal weapons with the United States is a negotiating ploy that is unlikely to be implemented, former Central Intelligence Agency (CIA) officer Philip Giraldi told Sputnik.

US Has No Plans to Deliver Lethal Weapons to Ukraine 'For Now'
WASHINGTON (Sputnik) — On Monday, Ukrainian Ambassador to the United States Valeriy Chaly proposed producing weapons in cooperation with the United States on Ukraine soil.

“It is a ploy to tie the United States to Ukraine more closely and is perhaps not serious in the present environment,” Giraldi said on Tuesday.

The United States almost never participated in such programs except with nations that were already full NATO members, Giraldi noted.

“Co-production is very rare outside of NATO,” Giraldi explained. “Egypt is the only example I can think of — they produce by license the [US] Abrams tank.”

Ukraine had significant heavy industrial capabilities for military engineering programs that it had inherited from the Soviet Union, but it would require massive investment and equipment replacement to make any co-production project with the United States possible, Giraldi cautioned.

“Ukraine does have the capability to manufacture advanced weapons systems with its Soviet-era plants, but it would require a lot of retro-engineering to bring them up to speed,” Giraldi suggested.

Moscow would be certain to react with anger over such a program that would extend US military and strategic influence so dramatically into a country right beside the Russian heartland, Giraldi warned.

“Political consequences would be grave vis-a-vis Russia,” he pointed out.

Giraldi predicted that US President Barack Obama would not want to run the risk of escalating tensions with Russia unpredictably by approving such a scheme.

“I would think that Obama will be very cautious about interjecting offensive weapons into the Ukraine problem,” he said.

However, Giraldi said he believed Obama’s favored successor, Democratic presidential candidate Hillary Clinton, might approve the plan if she is elected on November 8.

McCain: Proposed US Defense Bill Would Give Ukraine ‘Defensive Weapons’
“Hillary [Clinton] will likely view it quite differently. [Republican presidential candidate Donald] Trump would not do it,” the CIA veteran concluded.