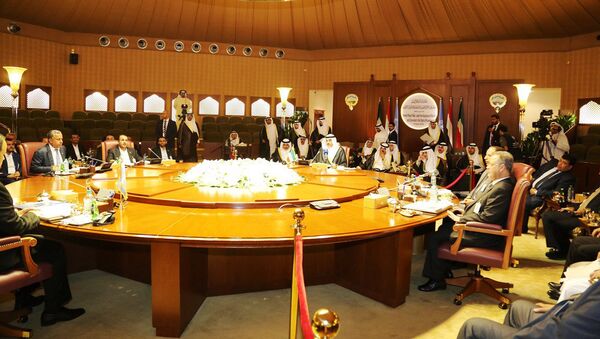 © AP Photo / Amiri Diwan, KUNA via AP
Subscribe
The delegation of Yemeni rebels who participated in the peace talks, refused to meet UN Special Envoy for Yemen Ismail Ould Cheikh Ahmed,in protest against the refusal of the Arab coalition led by Saudi Arabia to let the Oman plane, on which the delegation had to return to Sanaa more than ten days ago, pass, according to a source.

Arab Coalition Airstrikes Kill Civilians in Yemen, While UN Looks Away
CAIRO (Sputnik) — The delegation of Yemeni rebels who participated in the peace talks, has rejected a new meeting with UN Special Envoy for Yemen Ismail Ould Cheikh Ahmed, in protest against the actions of the Arab coalition led by Saudi Arabia, a source in the delegation told Sputnik Saturday.

The UN-brokered talks to end the Yemeni conflict started in Kuwait on April 21. The talks ended in early August, with the government and Houthi rebels failing to come to an agreement. As the talks wrapped up, the Houthi delegation flew to Oman for consultation with local authorities. From there, they tried to return to the Yemeni capital Sanaa, but failed over the government ban.

"[They refused to meet the UN envoy] in protest against the refusal of the Arab coalition led by Saudi Arabia to let the Oman plane, on which the delegation had to return to Sanaa more than ten days ago, pass" the source said.

The delegation is still in the Omani capital of Muscat. The UN Envoy is expected to arrive there on Sunday, the source added.

UN Chief Seeks Probe of Airstrike on Yemen School That Killed Ten Children
Yemen has been engulfed in a military conflict between the government headed by Abd Rabbuh Mansur Hadi and Houthi rebels, the country’s main opposition force. The Houthis are backed by army units loyal to former Yemeni President Ali Abdullah Saleh.

In early August, the UN envoy anticipated that the sides would return to the negotiating table no sooner than in a month. As hostilities intensified in Yemen, the rebels formed the Supreme Political Council, an executive body, with a prospect of ruling the country.