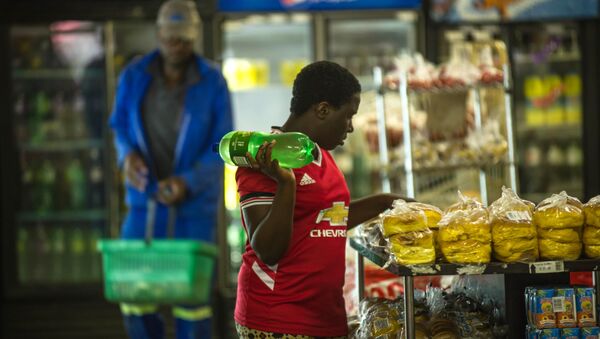 South Africa’s left-wing ANC leadership's drive to slap soft drink manufacturers with an additional tax threatens to decrease the nation’s investment appeal and hit fiscal revenues, rather than resolve the First World problem of obesity in the emerging market economy.

South Africa's Zuma Challenges Court Ruling to Re-Visit Corruption Charges
Kristian Rouz – Addressing the African National Congress (ANC)-proposed 20pc tax on sugary fizzy drinks that might be enacted in 2017, the largest soda bottler on the African continent, Coca-Cola Beverages Africa (CCBA) said they might decrease their capital expenditures in South Africa in order to compensate for the losses stemming from higher taxation and potentially lower consumer base.

The tax-related expenses are likely to be passed on to South African consumers and even affect Cola pricing across the continent, resulting in lower revenues for the soda-pop producer. Subsequently, South Africa, already suffering from a decline in investment amid the global commodity prices slump, could be hit by a deeper issue. A hike in taxes, aimed to decrease obesity levels, will result in a drop in the taxable base in the corporate sector, and subsequently, in lower tax revenues, as harsher regulation typically contributes to the deterioration of the investment climate.

Additionally, weaker fiscal performance might result in South Africa being slapped with the credit rating downgrades that the nation narrowly avoided earlier this year in the wake of the cabinet reshuffle. South Africa's debt is already barely above junk-grade, and Coca Cola’s decreased presence in the domestic market could push the international rating agencies over the fence, ultimately junking the nation and thus severely impairing its declining investment appeal, which a nation mired in double-digit unemployment and across-the-board poverty, primarily affecting the coloured communities, cannot afford. In South Africa, 'coloured' people are of mixed African, European and Asian ancestry; their history predates the racial apartheid laws of the 20th century.

“It is not what the company wants to do, but when you look at the impact the tax would have, we will have to relook at some investment commitments we have made,” Coca-Cola’s spokeswoman in South Africa, Vukani Magubane, said.

Finance Minister Pravin Gordhan, perceived as President Zuma’s stiff opponent, voiced his support for the Coke tax, even though his mission is seen as boosting the nation’s investment appeal. This seems surprising, if not random, as health- and environment-related regulations are not usually measures which are commonly implemented in a nation which is poised to lose its investment-grade debt status.
Local lobbyists, including the Public Health Association of South Africa, are supporting the legislation and claim it could decrease obesity levels. According to the National Treasury estimates, 13% of South African men and 42% of women are obese, which, in a nation with the unemployment level of 26.7%, has been deemed suspicious.

Meanwhile, the Beverage Association of South Africa, an industry group which represents the soft drink industry, said the 20% Coke tax would trigger inevitable layoffs among the 200,000 people employed in the industry and a permanent loss of payrolls across the nation.  Although soft drink producers would be the first hit, the regulation would also affect other related sectors of the economy, such as restaurants, hospitality, transportation and food retailers, in a domino effect.

“Commitments [concerning] jobs and the like will have to be relooked at in the context of a tax that will have a huge catastrophic effect,” Magubane of Coca Cola Africa said.

Similar taxes have existed for a while in Scandinavia, and recently enacted elsewhere in Europe, including the UK. In the United States, the Democratic Party has been pushing for a similar measure recently. However, none of these countries is facing grave structural problems in its economy in the way that South Africa is.

Recently, the global beverage heavyweight SABMiller and Coca Cola Company, which both hold major stakes in CCBA, attracted some attention from the South African authorities in an anti-trust investigation which resulting in the separation of the shares of SABMiller and Coca-Cola in the national market through the enforced control over their respective stakes in CCBA. Both enterprises made commitments to protect jobs and invest some 400 mln ZAR ($30 mln) in South Africa.