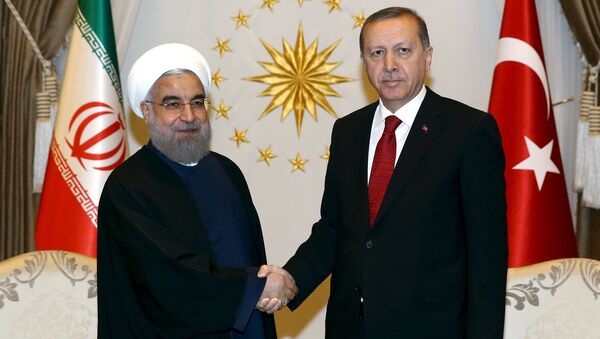 © REUTERS / Yasin Bulbul/Presidential Palace
Subscribe
International
India
Africa
Turkey is considering a coalition with Russia and Iran against terrorists in Syria. President Recep Tayyip Erdogan will soon visit Tehran to discuss the issue. The visit is also expected to normalize ties between Turkey and Iran, the two powers seeking dominance in the region.

Why Russia Uses Iran's Hamadan Airfield for Airstrikes in Syria
Next week, Erdogan will visit Tehran to discuss a Russia-Turkey-Iran coalition to fight terrorism in Syria, Fars news agency reported.

During his recent trip to Russia, the Turkish president held talks with Russian leader Vladimir Putin, including on the situation in Syria.

Earlier this week, Russia used the Hamadan airfield in Iran for its strategic bombers involved in the Syrian military campaign.

According to Al-Hayat newspaper, recently Erdogan already paid a short visit to Iran. It was also reported that after a foiled military coup in Turkey, Erdogan had a phone talk with Putin and then with Iranian President Hassan Rouhani.

Earlier this week, it was reported that Ankara could change its stance towards Syria and form an alliance with Russia and Iran. In turn, Turkish Prime Minister Binali Yildirim said it is time for Ankara to normalize ties with Damascus and resolve the Syrian crisis in cooperation with other regional players.

'Terrorists Stand No Chance Against Assad' as Turkey Sides With Russia on Syria
Turkey and Iran are the two countries seeking dominance in the region thus they have had differences on a number of issues, including Syria and Yemen.

Turkey supported a Saudi-led international coalition and its military campaign in Yemen while Tehran has opposed the operation. In addition, Iran has supported the government of Bashar Assad and Turkey has long insisted on Assad’s resignation.

A coalition between Russia, Turkey and Iran on Syria is theoretically possible but hard to work out in practice, Alexander Sotnichenko, an expert in Russian-Turkish relations, said.

"Such an alliance between the key players is crucial for the peaceful settlement in the Middle East. At the same time, Turkey on the one hand and Russia and Iran on the other hand still support different sides of the Syrian conflict. The recent developments in Aleppo show that Ankara is still supporting terrorists," Sotnichenko told the Russian online newspaper Vzglyad.

However, at a time when Turkey has problems with the West, Erdogan understands that he needs good relations with Russia and Iran. During the visit to Iran, Erdogan will try to bolster his positions in the talks with Moscow, the expert suggested.

At the same time, it is premature to say that Erdogan could break up with NATO.

Why Turkey 'Could Very Likely Make Concessions to Russia, Iran on Syria'
"NATO is a deeply integrated military and technological alliance. In turn, Moscow cannot provide the similar level of partnership to Turkey," he said.

Stanislav Tarasov, head of the Middle East-Caucasus think tank, underscored that the West is now leaving Turkey alone with serious challenges, including the attempted coup and refugee crisis.

"It’s no surprise that Erdogan is looking for partners in Russia and Iran," he said.

Tarasov also pointed out that despite numerous tensions between Ankara and Tehran they have a common stance on the Kurdish problem.

The idea is to preserve the territorial integrity of both Turkey and Iran. Currently, the Kurdish problem is one of the most important issues for Ankara. In order to resolve it, Erdogan may turn to Tehran.

Tarasov also assumed that Erdogan could easily abandon ties with Daesh and end support for terrorist groups in Syria.

"The current domestic situation in Turkey is threatening Erdogan’s power. The Turkish president would go to all lengths to stay in power," the analyst concluded.