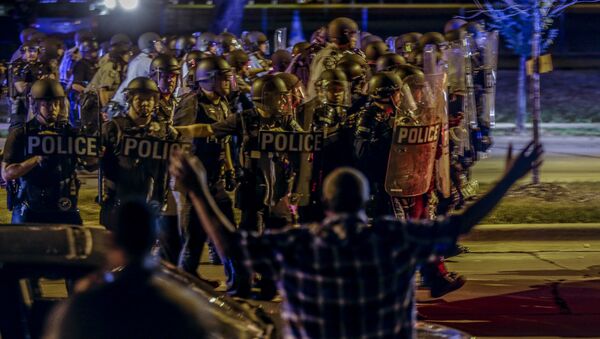 © AP Photo / Jeffrey Phelps
Subscribe
International
India
Africa
An African-American police officer from the US city of Milwaukee, Wisconsin, who shot a man over the weekend, has received death threats, local media reported on Wednesday.

WASHINGTON (Sputnik) — A photo of the officer, who has not been officially identified, has circulated on social media receiving threatening comments, Fox News reported.

Milwaukee Mayor Declares Teen Curfew After Unrest
The officer has been on administrative leave following the incident, according to media reports.

On Saturday, about 100 protesters clashed with police near the scene where, earlier in the day, a 23-year-old Black man with a stolen semiautomatic handgun was shot dead by police. Later that day, the local authorities arrested 17 people after rioters injured four officers, damaged seven squad cars and set six businesses on fire.

On Sunday, the Wisconsin National Guard was put to assist the city police of Milwaukee. Despite that violence erupted again with a 18-year-old man being seriously injured by a gun shot, four police officers wounded by rocks and bricks thrown by protesters and 14 people detained.