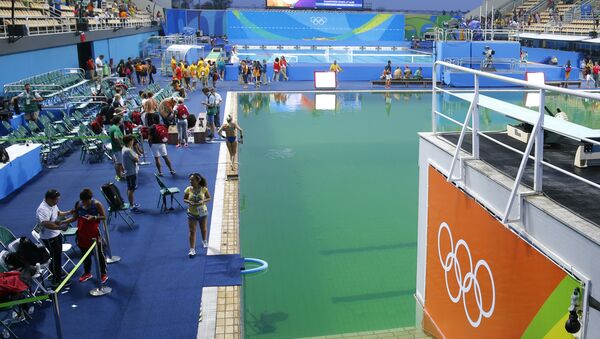 © AFP 2021 / Odd ANDERSEN
Subscribe
On August 21, 2016, the Olympic Games will come to an end. Some will remember the athlete’s performances and new records, while the Olympics’ curiosities will remain in others.

When it comes to hotels, Olympic guests experienced a flurry of service issues.

An American radio station NPR employee, who stayed at Barra da Tijuca, published a video showing problems with the shower in his room. The shower turned on only when he turned the water on in the sink.

Some blamed the organizers of the Olympic Games for not taking care of  the housing situation, while the majority ignored the situation, maintaining that the organization of the games was much better than expected.

It appears that the actor Leonardo DiCaprio has a twin — American archer Brady Ellison, who won a silver medal.

Just wanted to congratulate Leonardo DiCaprio for helping US archery team to win a silver medal.

Since when did Leonardo DiCaprio join the #USA archery team at #Rio2016? 🤔 pic.twitter.com/SKMhCLkwQE

Social network users started to joke about DiCaprio double life. He not only acts in films, but also secretly competes for the American national archery team.

It was also mentioned that Leo was the world’s first man, with an “Oscar” and an Olympic medal at the same time.

Leo DiCaprio enjoying some time off from acting to play archery in the Rio Olympics pic.twitter.com/WHsTEyTpCS

Are we all just going to bypass the fact that Leonardo DiCaprio is on the US archery team? pic.twitter.com/tCXhAYbFhP

Another reason for a round of jokes was the water in two swimming pools turning green.

Organizers explained the discoloration was a worker’s mistake. In the purification system, hydrogen peroxide was added and as a result it neutralized previously added chlorine.

Thus, the swimming pools were all filled with algae, making the color of water turn green.

“All covered with weed, absolutely all. In Rio water center such swimming pool exists!”

Some users offered to change color of all swimming pools to match the Olympic rings.

In addition, others offered to name the pool after Shrek, the green-skinned ogre from DreamWorks Pictures cartoon.

Even athletes reacted to this phenomenon!

Wait is someone playing a joke or are we celebrating St Patty's Day early here in Rio? #divingpond #Olympics pic.twitter.com/CsxxperHvM

Social network users called the lifeguards at the Olympic Games as having the most useless job in the world.

FACT: The most pointless job in sport — being a lifeguard at the Olympics. pic.twitter.com/FPVWVL5Ht9

If you ever feel useless, just remember that there is a lifeguard at the swimming #Olympicshttps://t.co/wIoRwj2PAd pic.twitter.com/UZaO7xduIZ

One of the most retweeted jokes was one of the lifeguards facial expression. Sitting on a chair, holding his head with his hands, he looked very bored and sad.

Bored at work already? It could be worse — you could be a lifeguard at the Olympics. pic.twitter.com/ZM0FOytMCc

However, lifeguards must be present at the Olympics.

There is a lifeguard for the Olympics?!?! Haha do they really think the best swimmers in the world might drown???

Nevertheless, users laughed at the lifeguard, saying that it was a dream job.

I want a job as easy as being a lifeguard at an Olympics swimming event.

This Chinese swimmer, who won a bronze medal, also became an Internet sensation. During an interview with CCTV, she was convinced that she swam100 meters in 59 seconds. But no! It was 58.95 seconds.

The swimmer was so delighted with her result that she burst out in emotion. "I can swim so fast? I am very pleased! I opened my full potential, I used all my strength. "

Teresa Almeida, Angolan goalkeeper on the women’s handball team, became Internet famous due to her unusual body. She is bigger than all of her team mates.

Why is no one talking about Angola's handball goalkeeper? pic.twitter.com/VPDPQH7bjJ

However, his angry face during the men’s butterfly swim will probably be the lasting image of him from this Olympics.

When a customer walks in 5 minutes before closing #PhelpsFace pic.twitter.com/OuK3Ho2T1q

One user was so inspired by the swimmer that decided to get a tattoo with his facial expression!

When will you be getting your #PhelpsFace tattoo? #Rio2016 pic.twitter.com/fFSLIxQR4D