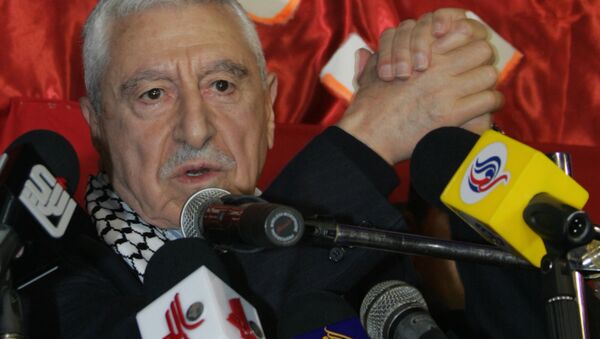 It's said that you can determine someone's nature by the company he keeps. The same goes for political parties. Sweden's Left Party has recently landed in hot water, both for keeping notoriously bad company and for splurging taxpayers' money supporting extremism.

Strange Bedfellows: Swedish Minister Dines With Turkish Neo-Nazis
Millions of kroner have been channeled by the Swedish Left to the Democratic Front for the Liberation of Palestine (DFLP) and other Palestinian extreme left-wing groups, an investigation by the Swedish newspaper Svenska Dagbladet has revealed.

Founded in 1968 as a secular Marxist-Leninist organization, the DFLP featured in the US State Department's list of terrorist groups until 1999 and is still recognized as an extremist group by many countries. During the 70s, it carried out terrorist attacks against civilians. The most infamous one occurred in 1974, when armed members of the organization stormed an elementary school in northern Israel, killing children with grenades and automatic weapons. When the dust settled, a total of 25 hostages dead in Ma'alot; 22 of them were children.

Unsurprisingly, the extreme left group still maintains an active militant wing. Although the DFLP has thankfully stopped murdering schoolchildren, is has not renounced deadly violence. In the 2000s, its members carried out attacks against Israeli military targets, in which soldiers were killed. The group's paramilitary wing is reported to have fighters based in both the West Bank and the Gaza Strip.

Swedish Scandals Reveal Rise of Islamist Extremism in Politics
Besides the DFLP, the Left Party contributed money to the Colombian Communist Party (PCC) and the Party of the Laboring Masses (PLM) in the Philippines, both of which were stamped as radical in Sweden. PCC regards itself as a "non-reformed Marxist-Leninist party" and is suspected of maintaining close ties with the Revolutionary Armed Forces of Colombia-People's Army (FARC). Correspondingly, the PLM advocates the introduction of a Soviet-style planned economy, which contradicts the Swedish Left Party's own stated platform. Together, the two parties have received over one million kroner each (over 120,000 USD) from their Swedish comrades over the past four years.

Millions in Swedish tax money has been channeled through the Left Party's Aid Foundation (VIF). Last November, VIF was revealed to have embezzled aid funds and donated hundreds of thousands of tax money to "dubious" organizations.

Svenska Dagbladet wasn't the only media outlet to question VIF's activities within the past year. In November, Aftonbladet, a socialist-leaning tabloid, revealed that VIF had embezzled from aid funds and donated hundreds of thousands of tax money to dubious organizations.

Altogether, millions of kroner have been channeled to terrorist and revolutionary organizations around the world in the context of the 75 million SEK (roughly 9 million USD) in aid allocated annually by the Swedish aid organization SIDA.