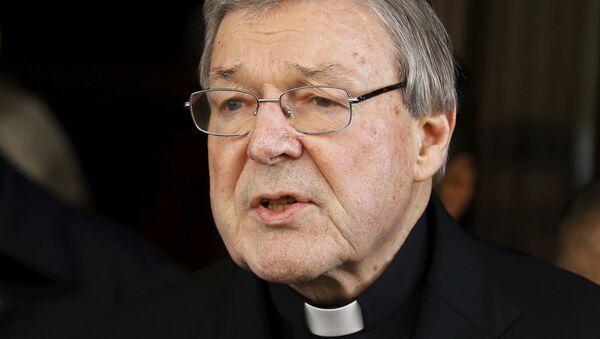 © REUTERS / Alessandro Bianchi
Subscribe
Cardinal George Pell, is calling for an investigation into media and police claims that he was involved in sexual misconduct with relation to children.

Pope Francis Warns Bishops Ignoring Child Sexual Abuse to Be Sacked
MOSCOW (Sputnik) – Vatican treasurer, Cardinal George Pell, is calling for an investigation into media and police claims that he was involved in sexual misconduct with relation to children, the cleric’s office said in a statement.

"The cardinal calls for an investigation to assess whether any actions of elements of the Victoria Police and the ABC program amount to a conspiracy to pervert the course of justice," the statement says as quoted by The Otago Daily Times on Thursday.

On Wednesday, ABC TV aired a story featuring multiple allegations of Pell abusing little boys, starting from the 1970s. Pell has stressed that the allegations, particularly from two men who claim that he abused them, when they were little, while serving as a priest in Ballarat, in the Australian state of Victoria, are not true.

"While the Cardinal in no way wishes to cause any harm to those making allegations of sexual misconduct and abuse against him, the simple fact is that they are wrong," Pell’s office said in its statement.

Victoria Police chief commissioner Graham Ashton told Melbourne radio 3AW on Thursday that an investigation is underway into allegations against Pell. Ashton also denied any reports claiming that police had leaked any information related to Pell to ABC.