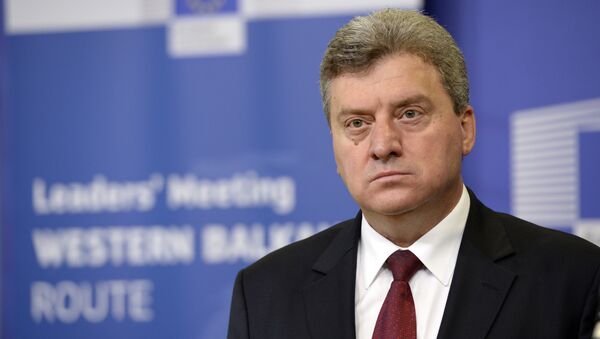 "As the [Islamic State] has been losing territory on the battlegrounds in Syria,.. in Lybia, a vast share of these people try to return… or some who reached EU territory together with migrants might try to take such action," Ivanov said, as quoted by the Macedonian Information Agency.

He said that intelligence and law enforcement agencies were on alert and were closely monitoring those returning from Syria and the regions affected by the activity of the Islamic State terrorist group, outlawed in many countries including Russia. Ivanov said that at least 86 people had so far returned to Macedonia from these regions.

Over the past two weeks, a wave of attacks has occurred in Europe, including a truck running over a celebrating crowd in France's Nice and a suicide bombing near an open-air music festival in Ansbach, a city in the German state of Bavaria, which made Europe urgently and extensively boost its safety and security measures.

Kosovo, the breakaway region of Serbia on Macedonia's border, has been called a "fertile ground for ISIS (Daesh)" by the New York Times. It reported on May 21, 2016 that "over the last two years, the police have identified 314 Kosovars — including two suicide bombers, 44 women and 28 children" have gone abroad to join Daesh, higher than any country in Europe. Residents of Kosovo are predominantly ethnically Albanian and Muslim. Approximately one quarter of Macedonians were Albanian Muslims according to the country's 2002 census, and the minority predominates in the northwest of the country.