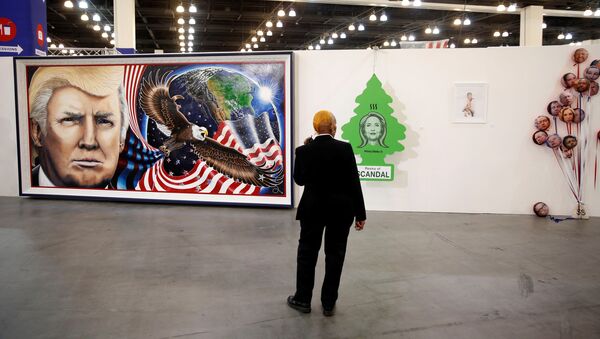 "This has to be the first time that a major presidential candidate has actively encouraged a foreign power to conduct espionage against his potential opponent," Sullivan stated. "That’s not hyperbole, those are just the facts. This has gone from being a matter of curiosity, and a matter of politics, to a being a national security issue."

On Wednesday, The New York Times published an editorial stating that Trump had spoken admiringly of Russian President Vladimir Putin. The editorial noted that Trump's campaign chairman Paul Manafort had extensive connections in Russia and Ukraine. Moreover, the editorial reiterated speculations that Russia may be behind the recent Democratic National Convention email hack.

US Far Less Safe Because Clinton Was Put in Charge of Foreign Policy: Trump
Trump ridiculed The New York Times over its support for the Democratic Party’s allegations that his presidential campaign is benefiting from Russian support.

The efforts by Clinton’s campaign to blame the email hack on Russia are intended to deflect attention from what the emails revealed, Trump explained.

The alleged Russian connection row was initiated on July 22, when the whistleblowing website WikiLeaks published nearly 20,000 emails from the Democratic National Convention, implicating its top officials of deliberately sabotaging the presidential candidacy of US Senator Bernie Sanders in favor of Clinton.

Clinton's campaign said Russian hackers could be behind the leak to help Trump in the race for the US presidency. The Kremlin dismissed the allegations as absurd.