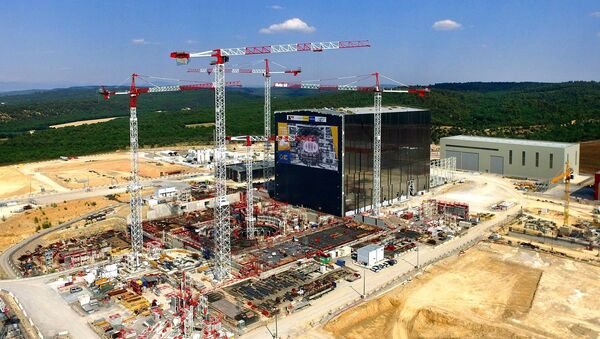 Head of the Atomic Energy Organization of Iran Ali Akbar Salehi said that six ITER researchers from the Cadarache research center in southern France, where the tokamak is under construction, recently visited Iran as part of preparations for Iranian experts to join the team.

Salehi said that the negotiations are a result of the Joint Comprehensive Plan of Action (JCPOA) agreed upon by Iran and the P5+1 group of countries (China, France, Russia, United Kingdom, and the United States plus Germany) in July 2015.

According to clause three of the plan, the P5+1 are committed to helping Iran attain advanced technological knowledge, and Iran's atomic chief said that Iranian experts also have a great contribution to make to the ITER project.

"The Islamic Republic of Iran is the only country in west Asia to be admitted to the project and all parties with good knowledge of the capabilities of Iranian experts are to welcome it," Salehi said, IRNA reported.

The experimental ITER project currently has seven partners: China, the European Union, India, Japan, Korea, Russia and the United States, which have pooled their financial and scientific resources to build the biggest nuclear fusion reactor in history. 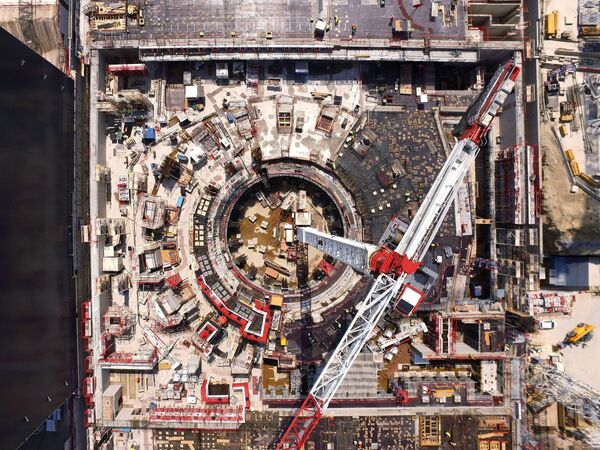 The progression of the Tokamak Building, captured by drone in July 2016
© Photo : ITER / EJF Riche
The device is called a tokamak, and it heats fuel, a plasma of deuterium and tritium, to temperatures of up to 150 million degrees Celsius within powerful magnetic fields.

ITER will be twice the size of the largest tokamak machine currently in operation, with ten times the plasma chamber volume – it will have a plasma radius of 6.2 m and a plasma volume of 840 m³.

Researchers predict its fusion power will produce 500 MW of power from an input of 50 MW, and give them the opportunity to research the industrial applications of the technology.

The first tokamak systems were created in the 1960s by scientists in the Soviet Union. Scientists believe that thermonuclear fusion, the same limitless energy source that powers the Sun, is one of the most promising options for generating large amounts of carbon-free energy in the future. 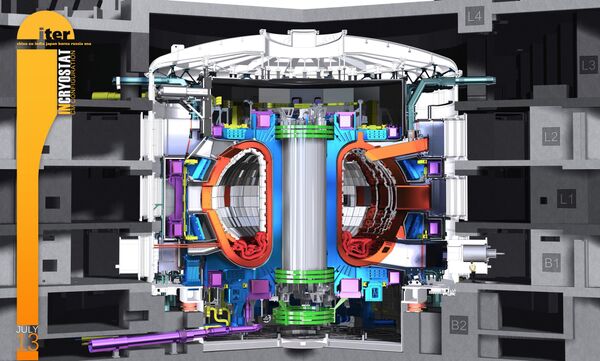 The Configuration Management Model of the ITER Tokamak, without its plasma, produced by the Design Integration Section in July 2013.
© Photo : ITER
Hasan Beheshtipour, a Press TV correspondent and expert on atomic issues, told Sputnik that Iran has a lot of expertise in the field of nuclear fusion to offer the project.

"Iran's Research Institute of Plasma Physics and Thermonuclear Reaction was founded in 1974; it has  more than 30 years of experience in the field, has carried out a lot of successful research and its scientists have published works in a range of international scientific publications," Beheshtipour explained.

"The JCPOA plan's implementation has laid the foundation for scientific cooperation with other countries, particularly with Russia, China, France and Hungary … Iran's participation in this project appears promising."

"As we can see, the implementation of Iran's peaceful nuclear project, monitored by the International Atomic Energy Agency (IAEA) and in accordance with all international norms and laws, is opening new horizons for more productive international collaboration like the ITER project," Beheshtipour said.

"What is important, is that a year after the agreement on Iran's nuclear program with the P5+1, the issue has changed from being a (perceived) threat to military security, to become a legal and political issue. There is a favorable atmosphere for the discussion of technical, scientific and legal issues, rather than the alleged threats posed by Iran," Bounesh said.

"In connection with this, Iran's experience in the development of atomic energy is recognized at the appropriate level by leading players in Europe and the IAEA itself, and that means a lot."