At Least 2 Dead, 17 Injured in Shooting at Florida Night Club 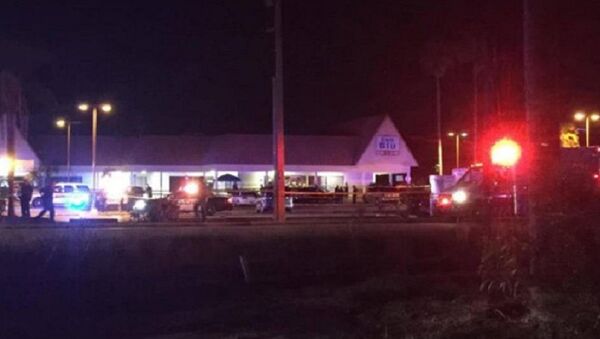 At least two people have been killed and a total of 17 have been shot near Club Blu Bar & Grill in Fort Myers, Florida, the local police department said Monday.

MOSCOW, (Sputnik) —  Three people have been detained for questioning in connection to the shootings, according to authorities.

Two of the suspects were taken in before 5:30 a.m. local time in Fort Myers, Police Capt. Jim Mulligan said, as cited by the WINK news outlet.

PHOTO: From "teen night" shooting scene at #ClubBlu in Fort Myers. Our photogs and reporters are on scene.@ABC7SWFL pic.twitter.com/ie8FZteycW

​​According to the police, quoted by the WINK News broadcaster, the shooting took place early in the morning on Monday. The victims have not been identified as yet.

​Witnesses reportedly heard some 30 gunshots from more than one gun. People were 'dodging bullets and running and dropping between cars' to get to safety.

The level of injuries to victims range from minor to life-threatening, according to Capt. Jim Mulligan of the Fort Myers Police Department. Two of those injured have reportedly been put in intensive care, with one person in a critical condition.

VIDEO: Car riddled with bullet after the shooting in #Florida — @Malcolmsmedia pic.twitter.com/NzjrVcs0SO