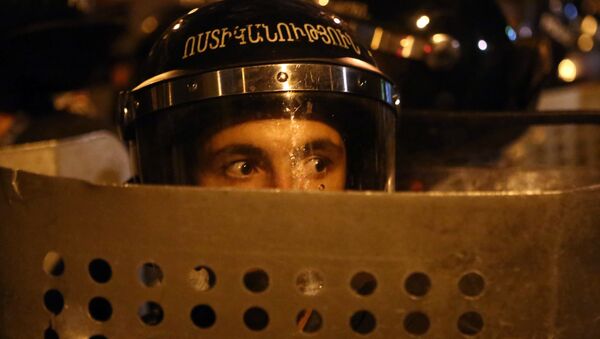 A member of an armed group that seized police station in Armenian capital Yerevan, Varuzhan Avetisyan said Saturday that his organization will not give up until their requirements are fulfilled.

Hostage-Takers Release All Captives Held at Yerevan Police Station
YEREVAN (Sputnik) — Earlier in the day, it was reported that the armed group released all hostages from the seized building.

"The information that our group is going to give up has no grounds. We will lay down the arms only if all our requirements are fulfilled: [Armenian President] Serzh Sargsyan's resignation, then a transitional period which will include the formation of provisional government, in which members of Armenian Republican party are not allowed to participate, and new elections," he told journalists.

On July 17, the armed group took several police officers hostage at a patrol police station in Yerevan’s district of Erebuni. The hostage-takers were demanding the release of Jirair Sefilian, an opposition politician and the founder of the New Armenia Public Salvation Front.