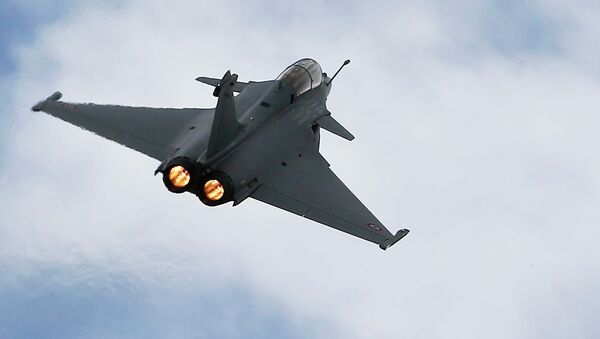 © REUTERS / Regis Duvignau/Files
Subscribe
India's deal with France to purchase Rafale fighter planes is taking more time than expected as the two sides have yet to reconcile their differences over a number of issues related to the deal.

NEW DELHI (Sputnik) — Manohar Parrikar, India's Defense Minister, says "the negotiations are underway and the inter-government agreement and offset contract are yet to be finalized.

The details, including a transfer of technology through offsets, will emerge after the negotiations are completed."

Replying to a query over the Rafale deal, Manohar Parrikar informed parliamentarians that the parties to the deal will decide whether or not the fighter jets are manufactured locally once negotiations are completed.

However, Parrikar clarified that the Rafale aircraft being procured will have advanced features like active electronically scanned array radar systems, the capacity for mid-air refueling and advanced electronic warfare equipment as part of their design.

France Puts Off India by Proposing New Conditions for Rafale Deal
Last week, the Defence Acquisition Council (DAC), the top decision-making body within India's Defense Ministry, rejected France's offer to sell 36 Rafale fighters for 8.49 bln USD. Sources say the DAC is seeking a further price reduction. Recently, France also proposed that it would assist India in reviving the unsuccessful Kaveri gas turbine jet engine project and a host of other projects including the manufacturing of fighter jet components, but it would take a final call only after the contract for procurement of Rafale jets was formally signed. According to sources, India has involed the French Embassy in order to expedite the negotiations, which remain mired amid many issues.

On January 26, Indian Prime Minister Narendra Modi and visiting French President Francois Hollande suggested in a joint statement that negotiations for the purchase of 36 Rafale medium multi-role combat aircraft were nearly complete. Later, Manohar Parrikar, India's Minister of Defense, set a deadline of June 2016 for the deal. However, the deal still hasn't been announced.