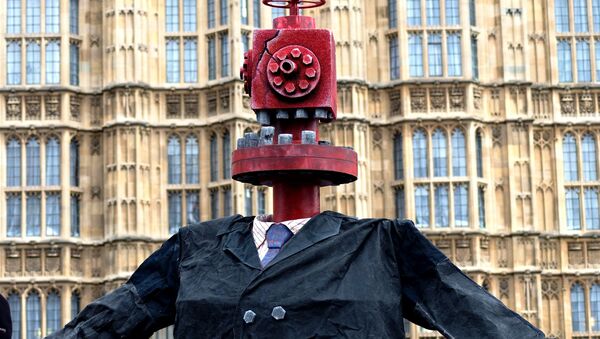 © Flickr / The Weekly Bull
Subscribe
International
India
Africa
When the Bureau of Land Management (BLM) held an auction for gas and oil leases on public lands in May, more than 300 protesters showed up at a Holiday Inn where the event was taking place. Scattered among them were undercover law enforcement officers, conducting surveillance on the demonstration.

The action was a part of the "Keep it in the Ground" anti-fracking movement, which seeks to block the development of new oil drilling, and has been pressuring the White House to curb coal mining and fracking, technically known as hydraulic fracturing, on federal public lands. Industry groups and federal agencies routinely criticize the activists and closely monitor their movements.

Email records show that undercover officers furnished details to the Lakewood Police Department as organizers were planning the event. Federal agents and local law enforcement agencies both went undercover to surveil the protest organizers and the event itself. Police also monitored affiliated anti-fracking groups such as the Rainforest Action Network, WildEarth Guardians, Break Free Movement and 350.org, with data and intelligence supplied by Anadarko, one of the region’s largest gas and oil producers.

Anadarko’s report was forwarded to Kevin Paletta, then chief of police at Lakewood, by public relations consultant John Inman, warning the department of “the very active off-shoot of 350.org” that had “the goal of encouraging ‘direct action’ such as blocking, vandalism, and trespass.” On May 12, the day of the protest, Paletta wrote in an email, "Gentlemen, Here is some additional intelligence on the group you may be dealing with today."

The auction went on without incident. Steven Hall, Communications Director at BLM Colorado said, "Our goal is to provide for public safety and the safety of our employees," when questioned about the agency’s undercover activity. He added, "Any actions that we take are designed to achieve those goals. We do not discuss the details of our law enforcement activities."

BLM reimbursed the Lakewood Department $2,500 for their services in securing the protest.

The federal government has taken an increasingly aggressive stance toward protesters, though there are few disturbances at demonstrations. Jeremy Nichols, climate and energy program director for WildEarth Guardians remarked, "I’m really wondering what more the BLM is up to…Some of the emails indicate more extensive intel gathering on their end."

Nichols asked, rhetorically, "Why are climate activists, who are only calling on the BLM to follow President Obama’s lead and heed universally accepted science, facing this kind of uphill response? It’s a shame that the BLM has turned climate concerns into a law enforcement issue instead of a genuine policy discussion."

He told GOP Congress members that the agency faced "abnormal security" issues. "We have had a situation where we have had militia; we’ve had people raising arms at different times. We are on heightened alert and we are concerned about safety. And so a situation that we are not used to, separating out who is a bidder and who is not, gives us pause," he said.

The website for the bureau maintains that it uses special agents only to investigate crimes that take place on public lands. The BLM states "Investigations may require the use of undercover officers, informants, surveillance and travel to various locations throughout the United States."