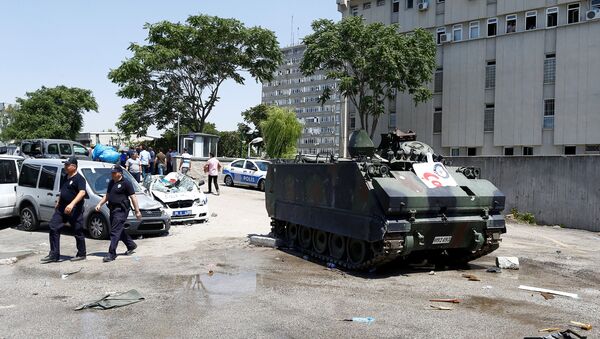 © REUTERS / Osman Orsal
Subscribe
International
India
Africa
According to the US ambassador to Turkey, speculations over US involvement in a failed coup attempt in Turkey damage relations between the two countries.

Turkey's Main Aim Amid Failed Coup to Retain Unity - Syrian Opposition
WASHINGTON (Sputnik) — Speculation that the United States was involved in Friday’s failed coup attempt in Turkey is false and damages relations between Washington and Ankara, US Ambassador to Turkey John Bass said in a press release on Monday.

"Some news reports — and, unfortunately, some public figures — have speculated that the United States in some way supported the coup attempt," Bass stated. "This is categorically untrue, and such speculation is harmful to the decades-long friendship between two great nations."

At the same time, the US would consider extraditing Fethullah Gulen to Turkey under the terms of the existing extradition agreement between Washington and Ankara, John Bass added.

Turkish officials have accused Gulen, a US permanent resident, of orchestrating a failed coup in the country on Friday.

"[W]e have been clear that the United States would be willing to provide assistance to Turkish authorities conducting their investigation into the coup attempt," Bass stated. "If Turkey decides to submit an extradition request for anyone legally resident in the United States, it will be considered under the terms of the US-Turkey extradition agreement."