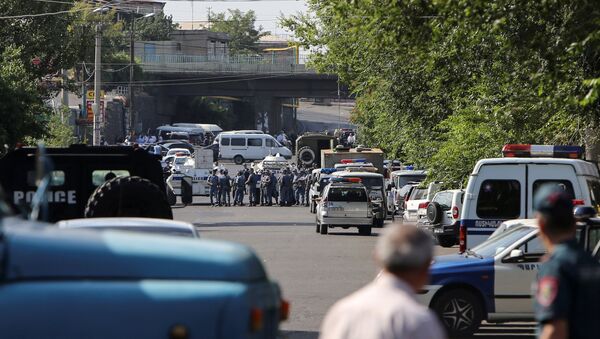 The armed group that seized a police building in Armenia's capital Yerevan on Sunday is refusing to surrender, the country's National Security Service said Monday.

YEREVAN (Sputnik) — A group of armed men has seized a police station on the outskirts of Armenia's capital of Yerevan on Sunday.

"Following lengthy negotiations night to July 18, one policeman was freed, as well as the ambulance driver. The armed group is refusing to free the rest of the hostages, including high-ranking police officers, and to put down weapons and surrender to the authorities," the Security Service said in a statement.

Armed Group Seizing Police Station in Yerevan Lets One Hostage Go
Acccording to earlier reports, seven police officers were taken hostage. Later, two hostages have been released by the Armenian special forces, according to local media. One police officer has been killed during the hostage situation.

The hostage takers told Armenian member of parliament Nikol Pashinyan that they also demand the resignation of the country's president Serzh Sargsyan.