Russia Must be Returned to G8 Summit - Former Japanese PM 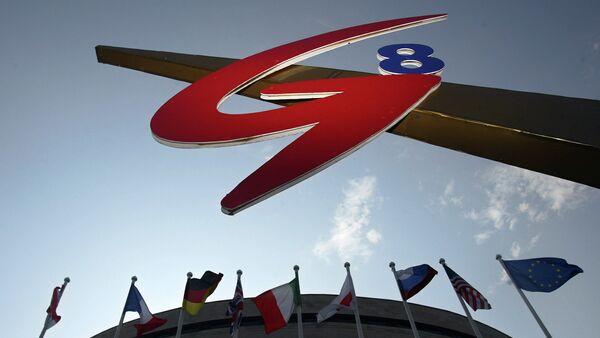 Setting Conditions for Russia's Return to G8 Format 'Absurd'
The G8 is a governmental political forum in which the heads of state or government of the major industrial democracies meet annually to discuss and deal with major economic and political issues of their countries and the international community as a whole.

In 2014, Russia's membership to the Group of Eight was suspended over Moscow's reunification with Crimea and the military conflict in Ukraine.

Back then the original G7 members said they would not come to the Russian Black Sea resort city of Sochi for a G8 summit, which was scheduled for June 4-5, 2014.

Instead, they met in Brussels without Russian President Vladimir Putin.

“With regard to the conflict in Ukraine, for example, Russia was excluded from the G8, which as a result became G7. In order to effectively deal with this issue, Russia should be included in the dialogue,” former Prime Minister of Japan, Yukio Hatoyama said at the fifth World Peace Forum in Tsinghua University.

According to him, China should also be included in the G8.

“China, having the largest population and being the second largest economy of the world, must also be included in this group, which will create G9,” he added.

Kremlin: Russia's Return to G8 Not on Agenda Yet
Earlier, Russian Foreign Minister Sergei Lavrov said that Russia is not taking any steps to return to the G8 and will not do so.

Russia will further adhere to a foreign policy course aimed at protecting its national interests and ensuring security of its people, Lavrov said during his annual address to the Russian Parliament.

According to the minister, despite the fact that the West is seeking global dominance Moscow will continue to protect its national interests. The ultimate goal of Russian foreign policy is cooperation with other nations to establish peace and resolve global conflicts.

At the same time, Lavrov said, Western countries have already felt the outcome of sanctions and restrictions they imposed against Russia.

Now, there is a growing number of those in the West who want Russia back in the G8 and want sanctions to be lifted.

"We are not taking any initiative on this issue," Lavrov said, adding that western partners were "persuading themselves that Russia has to be returned to G8."