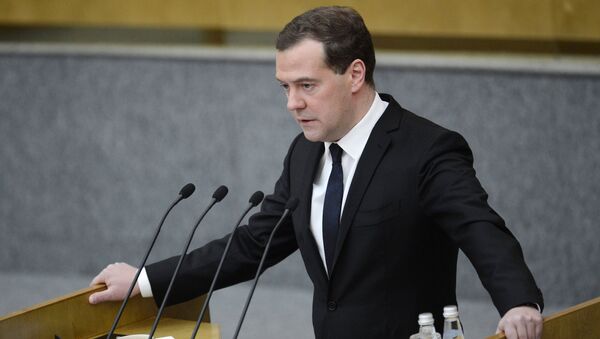 © Sputnik / Ramil Sitdikov
/
Go to the photo bank
Subscribe
The world community must cooperate in its reaction to such tragic events as the Thursday night deadly Nice attack, Russian Prime Minister Dmitry Medvedev said at the ASEM forum.

Two Russians Escape Scene of Nice Attack Unharmed, One of Witnesses Says
ULAANBAATAR (Sputnik) – The world community must cooperate in its reaction to such tragic events as the Thursday night deadly Nice attack, Russian Prime Minister Dmitry Medvedev said at the Asia-Europe Meeting (ASEM) forum currently underway in the capital of Mongolia.

"Terrorism has no boundaries and is a common threat both for Europe and Asia. As of now, there are 80 victims [of the Nice attack], including children, a large number of tourists. According to media reports there are EU and Russian citizens among the victims…We must find answers to such challengers, to show solidarity, to take to show solidarity, to do everything we can to fight against terrorism. Especially since terrorists and their sponsors only understand force, and we must use it," Medvedev said.

On Thursday night, a truck rammed into a large crowd that was celebrating Bastille Day in Nice, killing at least 80 people and injuring dozens of others. French President Francois Hollande did not exclude that the attack could be a terrorist act.

000000
Popular comments
Good luck with that! Since the western fascists in both the US and NATO declared Russia a "worse threat than ISIS", the likelihood for them to actually even trying to rein in their mercenaries, by themselves or together with Russia, is extremely small. This will serve as yet another pretext to invade other countries on their hit list and, eventyally, FORWARD and expand the positions of Saudi Barbarian wahhabists. Those are too valuable an asset for what they finally are designed for: To hit Russia and China. Russia has stepped up it´s campaign again in Syria, with,predictably, good results. These monsters must be exterminated before the US can ship them elsewhere