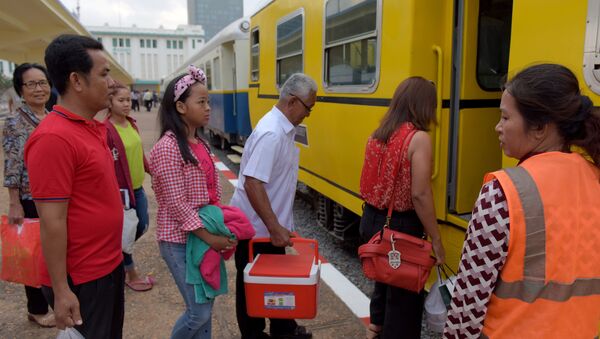 Cambodia and Thailand will complete the construction of a railway line connecting them by the end of 2016, the Cambodian Ministry of Public Works and Transport announced on Wednesday.

Cambodia Wants Russia to Engage in Country’s Economic Reconstruction - PM
BANGKOK (Sputnik) – On Sunday, Minister of Public Works and Transport Sun Chanthol inspected the construction site in Poipet’s Stung Bot district where the railway tracks from Cambodia and Thailand would join. The construction of the Cambodian part of the railway is funded by the Asian Development Bank.

"The 6.5-kilometre [4-mile] railway line on the Cambodian side of the border, the junction with the Thai railways… will be completed, it could be finished by either November or December and become operational by the end of the year 2016," the ministry said in a statement.

The railway line is part of the link between Singapore and China’s Kunming province that will connect the whole of Association of Southeast Asian Nations (ASEAN) countries. The Kunming–Singapore Railway, the project formally revived in 2006, is aimed at increasing regional connectivity and economic integration, and is expected to become fully operational in the coming years, according to the UN Economic and Social Commission for Asia and the Pacific.