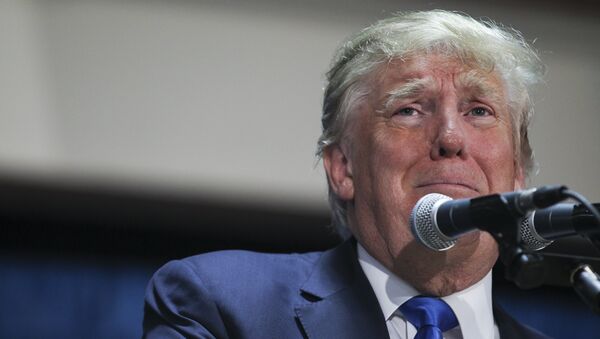 Radio Sputnik speaks with Mark Henegan, owner and head chef of Madiba, a restaurant using the nickname of South African anti-apartheid leader Nelson Mandela, about why he banned Trump and the burgeoning movement of restaurants refusing service to the controversial billionaire.

Henegan said his decision to ban Trump happened, "About a year after Trump made the remarks about the Mexicans and all that stuff. As a joke we found this sign that said 'toupee free zone' and it was up from July of last year." He explained that progressive politics is built into the DNA of Madiba. "We’ve always been a restaurant that’s really paid homage to Nelson Mandela. We did a lot of 'Obama evenings' over here, when Obama won, the whole street was like the headquarters for the Obama campaign. So we’ve always been very political. We involve ourselves in the community."

​The chef and sometime political activist said that his restaurant functions as a meeting spot for neighborhood activities, as well as being an eatery. "We’re not just a restaurant, we sponsor the basketball courts across the street. We work with a lot of locals, schools, it’s just kind of a place where everybody comes. All races, all colors, all ages and the neighborhood itself is a cool, open minded, liberal neighborhood."

According to Henegan, it isn’t just Trump’s off-color remarks that offend him, but the backward political thinking he feels the candidate represents. "We just feel that Donald Trump is not a conscious leader. He says a lot of hateful things towards women and towards everyone that isn’t supporting him. He doesn’t have my American dream in mind, which is inclusive of everyone."

Henegan said that Trump’s remarks about immigrants run completely counter to the restaurant owner’s own story.

"We opened up about 18 years ago in 1999,  so I think we were one of the first [South African restaurants] in the United States. I left South Africa when I was 21 years old, during apartheid. I came to the United States to follow the American dream. I opened the restaurant with about $10,000. It’s just a fun vibe. It’s not that we want to be hateful towards Trump, we just want to raise consciousness and say we need leaders in this world that will unite us instead of separating us."

Radio Sputnik asked Henegan if he has received support for his ban from neighbors and nearby restaurants.

Trump has not responded to his ban from Madiba, and Henegan doesn’t think he would want to visit the restaurant, but he isn’t the only eatery that has publicly declared that the reality television producer is unwelcome in their establishment.

High profile chefs including Michael Symon, Greg Martin and Jeff Ruby have banned Trump as well, though Ruby lifted the ban after receiving a flurry of negative online reviews and even death threats from Trump supporters.

000000
Popular comments
Another deluded fool who thought that the Communist Mandela and the ending of apartheid would bring a new era to South Africa. Well it changed South Africa alright, but not for the better!
terryjohnodgers
14 July 2016, 04:14 GMT
000000
I hope trump sues the restaurant for racism! Intolerance should not be permitted!