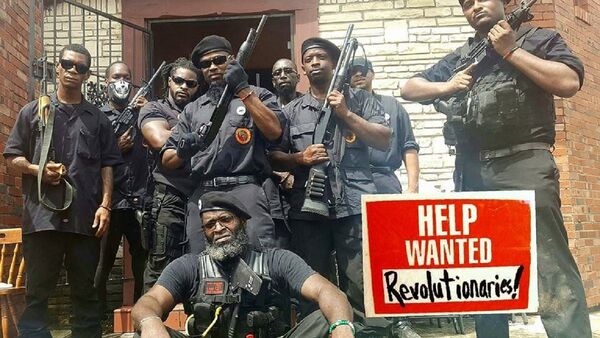 The New Black Panther Party has announced that their members will ‘open carry’ while gathering outside the Republican National Convention next week, for stated self defense, provided that it remains legal for them to do so.

Nude Photo Protest: Women Plan to Bare All at GOP Convention in Cleveland
Under Ohio law, protesters who possess gun permits will be allowed to carry weapons openly in the downtown area during the convention, though ironically, squirt guns are banned. Many groups supportive of presumed Republican nominee Donald Trump have also stated their intention to attend the event openly armed.

"If it is an open state to carry, we will exercise our second amendment rights because there are other groups threatening to be there that are threatening to do harm to us," Hashim Nzinga, chairman of the New Black Panther Party, told Reuters.

"If that state allows us to bear arms, the Panthers, and the others who can legally bear arms, will bear arms."

The prospect of several conflicting groups attending convention events and structured protest rallies while carrying weapons has left many on edge, especially after the shooting deaths of five Dallas police officers during a peaceful Black Lives Matter march last week. The New Black Panther Party has condemned the shooting, which Nzinga described as a massacre.

A small perimeter will be set up around the immediate vicinity of the Quicken Loans Arena, where the convention is being held, where only law enforcement and the Secret Service will be allowed guns.

The president of the Cleveland Patrolmen’s Association, Stephen Loomis, is urging those attending the event, whether inside or out, to leave their guns at home.

“The last thing in the world we need is anybody walking around here with AR-15s strapped to their back,” Loomis told the New York Times. “And the absolute tragedy in Dallas is proof positive that we just cannot allow that to happen. I would really just beg these folks, just leave your guns at home. Come, say whatever it is that you want to say, make whatever point it is that you want to make, but it’s going to be very, very difficult to deal with the R.N.C. as it is.”

Nzinga stated that he expects a “couple hundred” members of the New Black Panther Party to join a protest at the convention, scheduled for Thursday.