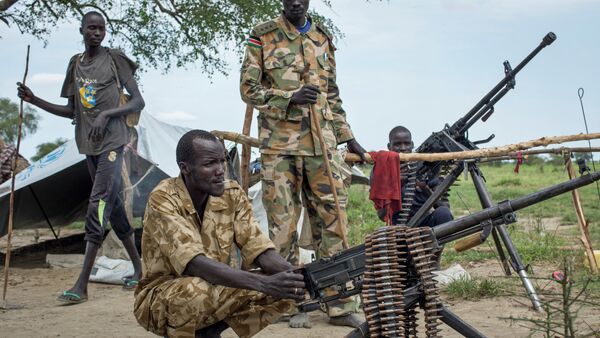 UNITED NATIONS (Sputnik) – The statement comes after an emergency UNSC meeting, held after renewed fighting broke out last week between the soldiers of the Sudan People's Liberation Army (SPLA), loyal to Kiir, and the SPLA in Opposition, which is supporting Machar. At least 150 soldiers were reportedly killed.

“The members of the Security Council urged an immediate end to the fighting by all concerned and demanded that President Kiir and First Vice President Machar do their utmost to control their respective forces, urgently end the fighting and prevent the spread of violence, and genuinely commit themselves to the full and immediate implementation of the peace agreement, including the permanent ceasefire and redeployment of military forces from Juba,” the statement said.

The members of the UNSC strongly condemned the violence in Juba, especially the attacks on the UN facilities. According to the statement, attacks against civilians and UN premises and personnel in South Sudan may constitute war crimes.

The statement also called on the countries in the region, the African Union Peace and Security Council and the Inter-Governmental Authority on Development, to “continue firmly engaging with South Sudanese leaders to address the crisis.”

The UN Security Council (UNSC) is ready to consider enhancing its peacekeeping mission to South Sudan (UNMISS) following violence in capital Juba, in which dozens, including the mission’s staff, were affected, a statement by the UNSC also said.

The statement comes after an emergency UNSC meeting, held after renewed fighting broke out last week between the soldiers of the Sudan People's Liberation Army (SPLA), loyal to President Salva Kiir, and the SPLA in Opposition, which is supporting First Vice President Riek Machar.

“The members of the Security Council expressed their readiness to consider enhancing UNMISS to better ensure that UNMISS and the international community can prevent and respond to violence in South Sudan. The members of the Security Council encouraged states in the region to prepare to provide additional troops in the event the Council so decides.”

The UNSC also expressed condolences to the families of the UNMISS staff who were killed in the fighting that erupted last week. The Security Council also stressed the need for UNMISS “to make full use of its authority to use all necessary means” in order to protect civilians.

The South Sudan armed ethnic conflict erupted in December 2013, a year-and-a-half after the nation gained independence from Sudan, when President Kiir blamed First Vice President Machar of preparing a military coup. The conflict forced more than a million people to flee their homes.

In August 2015, Kiir and Machar signed a peace deal for the formation of the Transitional Government of National Unity.

000000
Popular comments
let them kill oneself. When is no more ammunition, the war will be over!
renfer
11 July 2016, 14:17 GMT
000000
Newsfeed
0
New firstOld first
loader
LIVE
Заголовок открываемого материала
Access to the chat has been blocked for violating the rules . You will be able to participate again through:∞. If you do not agree with the blocking, please use the feedback form
The discussion is closed. You can participate in the discussion within 24 hours after the publication of the article.
To participate in the discussion
log in or register
loader
Chats
Заголовок открываемого материала
Worldwide
InternationalEnglishEnglishMundoEspañolSpanish
Europe
DeutschlandDeutschGermanFranceFrançaisFrenchΕλλάδαΕλληνικάGreekItaliaItalianoItalianČeská republikaČeštinaCzechPolskaPolskiPolishСрбиjаСрпскиSerbianLatvijaLatviešuLatvianLietuvaLietuviųLithuanianMoldovaMoldoveneascăMoldavianБеларусьБеларускiBelarusian
Transcaucasia
ԱրմենիաՀայերենArmenianАҧсныАҧсышәалаAbkhazХуссар ИрыстонИронауОssetianსაქართველოქართულიGeorgianAzərbaycanАzərbaycancaAzerbaijani
Middle East
Sputnik عربيArabicArabicTürkiyeTürkçeTurkishSputnik ایرانPersianPersianSputnik افغانستانDariDari
Central Asia
ҚазақстанҚазақ тіліKazakhКыргызстанКыргызчаKyrgyzOʻzbekistonЎзбекчаUzbekТоҷикистонТоҷикӣTajik
East & Southeast Asia
Việt NamTiếng ViệtVietnamese日本日本語Japanese俄罗斯卫星通讯社中文（简体）Chinese (simplified)俄罗斯卫星通讯社中文（繁体）Chinese (traditional)
South America
BrasilPortuguêsPortuguese
NewsfeedBreaking
04:43 GMTUS Marine Colonel Put in Brig For ‘Asking for Accountability’ Over US Departure From Afghanistan
04:03 GMTWitness Who Claims She Saw Prince Andrew Dancing With Giuffre at Club to Testify in Court - Report
03:24 GMTBennett Claims He Said 'No Three Times’ to President Biden During Their August Meeting
03:16 GMTRepublicans Slam DHS Chief Mayorkas for Allowing Thousands of Haitians Into US
01:37 GMTUS ‘Humiliated Like Never Before’, Trump Says, After DHS Allowed Thousands of Migrants to Pour in
01:31 GMTLockheed Martin to Build US Army’s Next Generation Tactical Vehicle Based System
01:10 GMTBorder Patrol Agents Disgruntled Over Biden's Attempts to Throw Them 'Under the Bus' - Report
00:53 GMTBeard-Check: Afghan Barbers Banned From Shaving, Trimming Beards - Reports
00:27 GMTR. Kelly Found Guilty: Will Artist Be Removed From Music Services?
00:03 GMTIs Sir Alex Ferguson Right, That Ronaldo, and not Messi, Could Score a Hat-trick for Anyone?
00:00 GMTUS Senator Menendez Urges New Sanctions on Turkey if It Acquires More Russian Weapons
YesterdayInsurgents Who Detained President of Guinea Declare Transitional Charter - Reports
YesterdayTexas Lawmakers Propose New Congressional Districts in Cities of Austin, Houston
YesterdayIOM Looking for Alternatives for Haitians at US Border, Brazil Being 1 Option - Sources
YesterdayCzech Republic Will Purchase Israeli-Made Air Defenses to Replace Soviet Gear
YesterdaySPD Leader Scholz Says Yet to Hear Congratulations From CDU/CSU Rival
YesterdayTaliban Say Norwegian NGO Promises to Ship Humanitarian Aid to Afghanistan This Winter
YesterdayUS Blue-Chip, Tech Stocks Fumble on Worries of Rate Hike
YesterdaySerbian Troops Monitoring Situation at de-Facto Serbia-Kosovo Border Amid Protests
YesterdayUnidentified Man Threatens Journalist, France's Potential Would-Be President Eric Zemmour - Reports