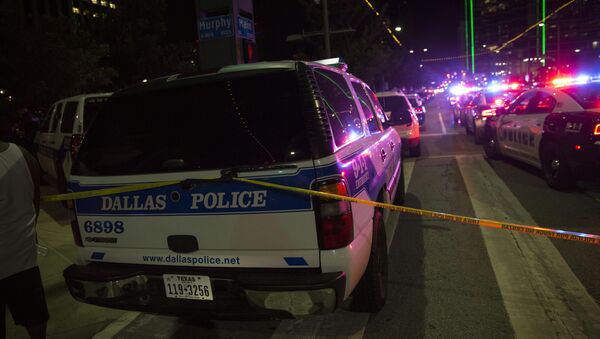 As Thursday night’s sniper-attack chaos was unfolding, Dallas police tweeted a photo of an innocent man, mistakenly identifying him as a “suspect” in the shooting and asking for the public’s help in tracking him down.

The mistake could have cost protester Mark Hughes his life. The man was not aware that his photo had been posted on Twitter and shared by several news outlets, until he found out from a phone call, and quickly turned himself in to police to protect himself.

"In hindsight, 20/20," Hughes told reporters later, "I could have easily been shot."

According to Hughes, Dallas police officers lied to his face while he was in an interrogation room, telling him they had a video of him shooting a gun and a witness that could confirm the accusation.

"At the end of the day, it's the system. The system was trying to get me," he stated.

Hughes had been recorded on video participating in a demonstration over the recent police killings of black men in Minnesota and Louisiana.

The protester legally owns a rifle, which he handed over to police officers as soon as he learned that he had been declared a suspect. That moment was also recorded, appearingly by someone who saw a tweet by local police.

Here's video of the "suspect" handing over his gun when the shooting started. #Dallas #DallasPoliceShooting pic.twitter.com/vYl4Z9o6qm

​​"I don't know what to say," Hughes told KTVT after the incident. "I can't believe it."

​Twitter exploded with demands to delete the original police department tweet after users found out it was a mistake.

.@DallasPD how much longer are you going to be irresponsible with this image? You questioned and released him. He's innocent.

Main Suspect in Dallas Attack Served in Afghanistan, Received Awards
​​The false Twitter accusation wasn't deleted until late Friday afternoon, after it had been been retweeted more than 40,000 times, and liked over 18,000 times. Earlier, a Dallas police spokesperson told Mashable, by way of explanation, that the tweet would remain online, "because we're keeping it on there."

Five police officers were killed and seven injured in the ambush. The actual gunman, 25-year-old Micah Johnson of Mesquite, Texas, was killed by a Dallas police bomb-diffusing robot, after negotiations failed. Prior to his death, Johnson told Dallas police that he was acting alone.