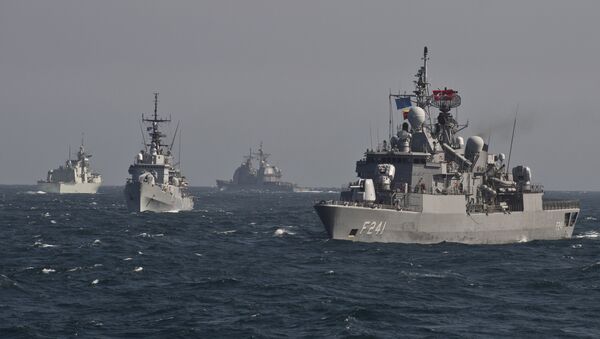 © AFP 2021 / DANIEL MIHAILESCU
Subscribe
Russia will face increased NATO activity in the Black Sea because the region is strategically important for the alliance, a Stratfor report read.

Bulgaria Rejects NATO Fleet in the Black Sea, Romania Hurriedly Backs Off
According to the report, in the coming future, the "competition to control the Black Sea will undoubtedly heat up."

After the Crimean referendum in 2014, the regional balance of power shifted, according to the report. Ukraine has been pushed out of the arena while Russia has significantly strengthened its Black Sea fleet.

"Meanwhile, the strategic importance of the waters has risen in NATO's eyes as the bloc seeks to bolster its deterrence against Russia in Europe," according to Stratfor.

The article noted that NATO should take into account the 1936 Montreux Convention which imposes limits on nations that do not border the Black Sea. It restricts the tonnage of warships as well as aggregate tonnage, number of vessels and duration of stay for any country.

However, the alliance could bypass the restrictions, by deploying to the Black Sea warships of different nations on a rotational basis. At the upcoming NATO summit in Warsaw the alliance will discuss the possibility of bolstering the NATO force in the Black Sea.

NATO to Decide on Boosting Eastern, Southern Flanks at Warsaw Summit
Not all NATO members bordering the Black Sea are expected to support the buildup in the region. While Romania is likely to support the move such countries as Bulgaria and Turkey may be more reserved because they do not wants tensions with Russia, the report read.

According to Stratfor, until recently Turkey was a strong supporter of the initiative in the Black Sea. However, in the past few weeks, Ankara has taken steps to normalize ties with Moscow.

Stratfor analysts also compared the balance of naval powers in the region. NATO has superiority over Russia in the number of warships. But Russia has some other advantages, including in aviation. In addition, Moscow has been modernizing the fleet, including submarines.

To sum up, Moscow will not be able to rely on the Montreux Convention because NATO will find ways to bypass the restrictions and take the naval leadership in the Black Sea. However, Russia’s positions in the Crimean Peninsula give Moscow a serious advantage over the alliance, according to the report.

000000
Popular comments
NATO nazi organisation needs a very tough lesson and if they dont back off they will inevitably get it.