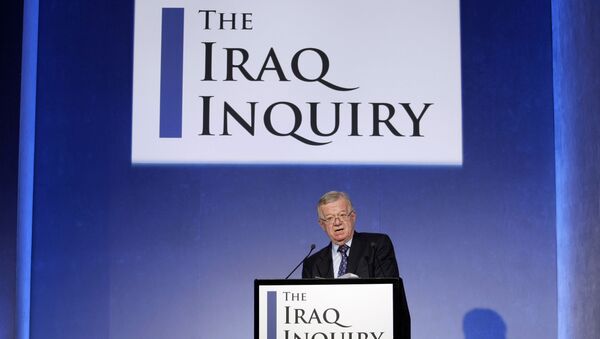 The Chilcot Inquiry into Britain's role in the 2003 Iraq War has concluded in London after seven years of delays caused by its sheer scope and wrangling over how much should be disclosed.

The full version of the Iraq War Inquiry report you can find here.

​"The question of the inquiry was — was it necessary to invade Iraq in 2003," Chilcot said.

"We concluded that Britain decided to invade Iraq before the peaceful options for disarmament had been exhausted. Military action at that time was not a last resort," he said. Britain's plans for post-invasion Iraq were 'wholly inadequate,' he added.

​"The consequences of the invasion are underestimated," Chilcot said at the press conference. However "Saddam Hussein cannot be removed without invasion," he added.

A legal basis for UK military action in Iraq was "far from satisfactory," Chilcot noted.

"Ex-British Prime Minister Tony Blair was warned by intelligence that military actions in Iraq would increase the al-Qaeda threat to Britain and British citizens. He was also warned that the invasion may lead to arms ending up in the hands of terrorists," Chilcot said.

​"It is now clear that policy in Iraq was based on flawed intelligence which was not challenged and should have been," Chilcot said.

Saddam Hussein, the then president of Iraq, posed no imminent threat at the time of the 2003 invasion, Sir John Chilcot said presenting an inquiry on the United Kingdom's role in the Iraq War.

"Military action in Iraq might have been necessary at some point, but in March 2003 there was no imminent threat from Saddam Hussein," Chilcot said.

"The strategy of containment could have been adapted and continued for some time. The majority of the [UN] Security Council supported continuing UN inspections and monitoring," he underlined.

Despite promises the cabinet would discuss military options, it was not discussed, Chilcot added. Mr.Blair did not ensure flexible and fully-resourced plans for the invasion that addressed known risks.

Sir John Chilcot said that the UK government of Prime Minister Tony Blair had failed to assess risks associated with invading Iraq in 2003 and that the post-conflict security planning was inadequate.

"The government’s preparations failed to take account of the magnitude of the task of stabilizing, administering and reconstructing Iraq, and of responsibilities that were likely to fall to the UK," Chilcot said in a statement on the findings of his report.

"The UK took particular responsibility for four provinces in the southeast. It did so without a formal ministerial decision and without ensuring that it had the necessary military and civilian capabilities to discharge its obligations, including, crucially, to provide security," he continued.

The word "fail" appears 84 times in the #Chilcot report summary alone. Says it all.

​Failures during the preparations for the military invasion continue affect British life nowadays. People of Iraq suffered greatly, millions of people were displaced.

Chilcot was not asked to give a legal verdict, but comes pretty close to saying that war may well have been illegal

The UK invasion in Iraq in 2003 ended in humiliating pacts with local militias that were targeting its troops and was far from success, Sir John Chilcot said.

"By 2007, militia dominance in Basra, which UK commanders were unable to challenge led to the UK exchanging detainee releases for an end to the targeting of its forces," he said in a statement about the findings of his report.

"It was humiliating that the UK reached a position in which an agreement with a militia group, which had been actively targeting UK forces, was considered the best option available. The UK military role in Iraq ended a very long way from success," Chilcot continued.

250,000 dead. 2.6 million words. Imagine the unquantifiable grief in the spaces between those statistics #Chilcot

​Former UK Prime Minister Tony Blair overestimated his own ability to influence decisions taken by the US authorities in regard to Iraq, Sir John Chilcot said.

"Mr. Blair overestimated his ability to influence US decisions on Iraq," Chilcot said.

"The UK's relationship with the US has proved strong enough over time to bear the weight of honest disagreement. It does not require unconditional support where our interests or judgments differ," he added.

​​The inquiry was commissioned to Sir John Chilcot, a Privy Counsellor, by then UK prime minister Gordon Brown in 2009, although calls to examine Britain’s role in the US-led Iraq invasion and its aftermath were made years before.

Labour party leader Tony Blair, who led the UK government at the time of the invasion, pushed back the start of the inquiry, which was to look into the accounts of his sensitive conversations with then US president George Bush.

Blair has been criticized for the United Kingdom’s involvement in the conflict that stretched through 2011. The campaign to topple then Iraqi president Saddam Hussein on suspicion that he had weapons of mass destruction killed 179 British troops and hundreds of thousands of Iraqis, many of them civilians.

Calls have been made for Blair to be tried for war crimes, including by Scotland’s former First Minister Alex Salmond, although the International Criminal Court (ICC) previously told UK media this was not possible.

The ICC did admit that it will search through the report for evidence of abuse and torture of Iraqis by British soldiers. Families of those who served and died in Iraq will be able to see an embargoed copy of the report on the day of its publication.