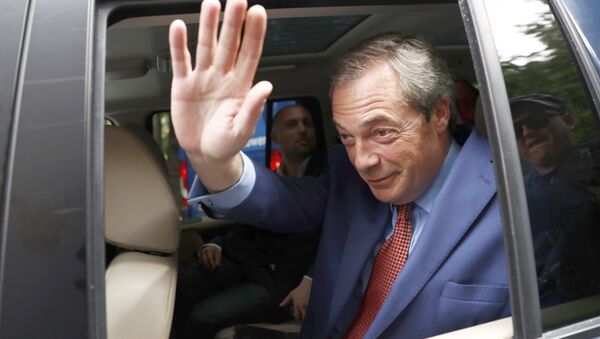 Nigel Farage's second resignation as leader of anti-EU party UKIP brings to an end a political career that has seen him move from being a City trader to become a thorn in the side of both Brussels and the Conservative Party.

Farage danced all over the UK in the run-up to the In-Out referendum on the UK's membership of the EU, which took place on June 23. In the end, he got his way. The UK voted out.

In his resignation speech Monday (July 4) he said:

"I came into politics from business because I believed that this nation should be self-governing. I have never been and I have never wanted to be a career politician. My aim in being in politics was to get Britain out of the European Union that is what we voted for in that referendum two weeks ago.

"And that is why I now feel that I have done my bit, that I couldn’t possibly achieve more than we managed to get in that referendum. And so I feel it’s right that I should now stand aside as leader of UKIP."

There was a swift reaction to his resignation on social media, with many disparaging him for what he had done.

Shut the door behind you Nigel and make sure you return the beer money #ukip #nigelgone pic.twitter.com/ZAhdS0SUnQ

"The real me can now come out," says Nigel Farage. pic.twitter.com/bw98TgvCFA

Often portrayed as a bumbling, beer-drinking oaf, Farage managed to take his party from being a small group of angry Brits on the sidelines to become a mainstream party, coming third in the share of voting at the 2015 general election.

He started out in politics as a Conservative Party member, but left to become a founding member of UKIP after the — then — Prime Minister John Major signed the infamous Maastricht Treaty, which set up the institutions of the EU as we know them today.

When David Cameron led the Conservatives back to power — in coalition with the Liberal Democrats — Farage used his media-friendly skills to pump up the volume for euroskepticism. Cameron's fatal flaw was not taking Farage and his crown more seriously. He blindly mocked the rise in support for the anti-EU party UKIP, reportedly describing them as a bunch of "swivel-eyed loons."

But Farage battled on — always available for a good quote and picture leaning against a bar drinking a pint of British real ale. He was a walking irony, being both a Europe-hater and married to Kirsten Mehr, a German national.

But he was winning significant support and he wound up both the country and the euroskeptics in the Conservative Party to such an extent that finally, in 2013, Cameron was forced to concede that he would make a manifesto pledge in the 2015 election to hold a referendum on the UK's membership of the EU before the end of 2017.

Nigel Farage has "done his bit,” he says. True. UK close to break up, economy heading for the ditch, race hate on the rise…

Farage stood as a candidate in the 2015 election, but lost the seat and promptly resigned, only to emerge two days later as the leader once more, after the party refused to accept his resignation.

The party only returned on MP — Douglas Carswell, who had defected from the Conservatives, in what many Conservatives took as a sign of trouble ahead.

By the time I get out of the queue, Nigel Farage will be UKIP leader again, and probably Prime Minister

The pied piper had done his work. With nothing more on his agenda, he finally said: "I want my life back" and left the stage.

Nigel Farage says "I want my life back". So do we all, Mr Farage, so do we all.