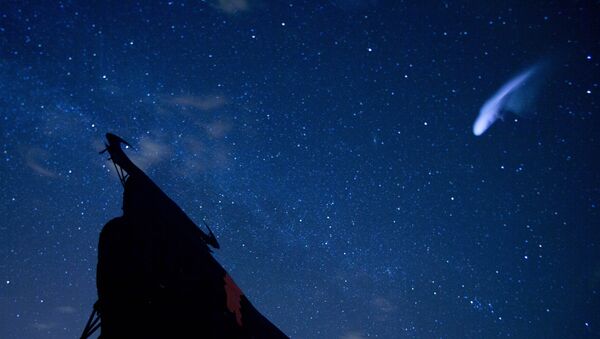 Subscribe
International
India
Africa
A recent poll showed that one in ten respondents would rather trust their fate to a giant meteorite than vote for Hillary Clinton or Donald Trump. Public Policy Polling asked participants, “If the choices for President were Democrat Hillary Clinton, Republican Donald Trump, and a Giant Meteor hitting the earth which would you choose?”

The giant meteorite came in third, with 13%. Trump came in second, with 38%, and Clinton took the lead with 43%. The remaining 7% could not choose. The giant meteorite found support across ideological lines, gaining approval from 21% of conservative voters, 16% of moderate voters and 23% of liberal voters.

Men proved to be more in favor of the meteorite than women, and Democrats and Republicans support a flying space rock slamming into the Earth equally. Interestingly, 27% of independent voters supported the meteorite, as opposed to 35% supporting Clinton and 31% supporting Trump.

Among the non-space-death-kill-rock options, Clinton leads Trump by a mere four points, 45% to 41%, with 5% opting for Gary Johnson, the Libertarian Party candidate, 2% for the Green Party’s Jill Stein and 7%  were undecided.

The poll company surveyed 853 registered voters during a period from June 27–28, via internet and landline telephone calls. The poll’s margin of error was 3.4 percentage points.

The survey flatly states, "It's a simple reality that both of this year's Presidential candidates are unpopular."