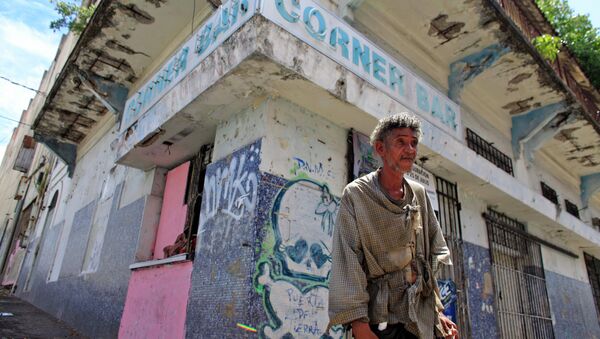 © AP Photo / Ricardo Arduengo
Subscribe
On Friday Puerto Rico officially defaulted on more than $1 billion of debt, despite the passing of “rescue” legislation by the US Senate on Wednesday. Radio Sputnik discusses with analyst Cate Long what awaits Puerto Rico following the tightening of its colonial shackles.

Long, a principal analyst with the Puerto Rico Clearinghouse think tank, asserted that an understanding of the island’s history, after it fell under the influence of the United States following the Spanish-American war of 1898, is essential to understand how the present financial crises occurred.

Since the end of the 19th century, Puerto Rico has shared sovereignty with the US government that effectively controls the Caribbean island government’s politics and economy.

In the 1980s Puerto Rico was granted tax preferences to encourage multinational manufacturing facilities to invest in the island, leading to rapid economic growth. In 1996, however, the administration of President Bill Clinton removed those tax preferences, causing investment to flee Puerto Rico.

“Since 2006 the economy has run flat,” Long said. “They’ve lost manufacturing jobs, lots of people that migrated to the [US] mainland. In that period the government borrowed a lot of money to stabilize the situation.”

The Puerto Rico government is currently incapable of providing many essential services, including electricity and water supplies. Taxes for the lower class are very high, based on percentage of income, while there are essentially “no taxes for the upper class,” Long noted. The island government has recently implemented increasingly stringent conditions for the private sector, including a 180-day period to register property in Puerto Rico and 45 days to begin electricity service, the analyst said.

Puerto Rico's Colonial Subjugation to US Curtails Economic Development
As a result of poor management, Long said, Puerto Ricans have been fleeing the island for the US mainland, in search of higher-paying jobs or even simple employment.

“The island is poorly run. Public workers have no paychecks. It’s the place that struggles economically because there are no jobs.”

At the same time, Long suggested that the pro-independence movement on the island is very weak, with three to five percent of the population supporting the idea of going it alone, without US support.

“Puerto Rico couldn’t survive on its own economically if it became independent politically from the US,” Long said. “Some 25 percent of its gross domestic product comes in the form of grants from the federal government. It basically supports the entire lower class of Puerto Rico.”

Puerto Ricans must currently rely heavily on Washington, and the US  federal government has “a lot of control on the island,” the analyst said. With the establishment of a new control panel by the US to address the island’s finances, Puerto Rico will have ever-fewer opportunities to determine its future.

“Absolutely it’s [the appointed control board] taking powers from the Puerto Rican people to seven-member board, which will [affect] the fiscal issues related to Puerto Rico,” Long said.