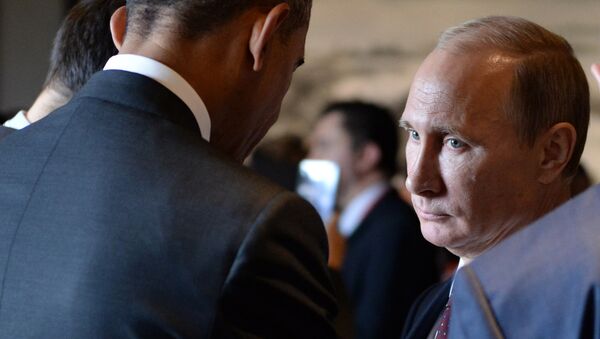 Retired CIA counterterrorism officer Philip Giraldi claims that a new US proposal to step up military cooperation with Russia leaked to the media reflected a growing desperation by the Obama administration to deliver the appearance of success in Syria.

Obama Administration Offers Russia Deal on Military Cooperation in Syria
WASHINGTON (Sputnik) — A new US proposal to step up military cooperation with Russia leaked to the media reflected a growing desperation by the Obama administration to deliver the appearance of success in Syria, retired CIA counterterrorism officer Philip Giraldi told Sputnik.

"It is clear what the US government wants," Giraldi said on Thursday. "They desperately need a ‘win’ in Syria to help [Democratic presumptive presidential candidate] Hillary Clinton in November and only Russia can help deliver that."

The US government has proposed a new agreement in Syria to Moscow to boost military cooperation between the two countries against some terrorists in exchange for Russia getting the government of Syrian president Bashar Assad to stop bombing US-supported rebels, the Washington Post reported also on Thursday.

However, Giraldi, a former CIA case officer and Army intelligence officer, dismissed the new initiative as an empty stunt devoid of any serious concessions.

"It is political theater," Giraldi stated of the US proposal.

The Obama administration realized its attempt to create a secular opposition military force to topple Assad had failed, and they now sought Russia’s help to prevent the Syrian Army from wiping out the last of these groups, Giraldi explained.

The US-backed New Syrian Army suffered a total defeat in its attempt to attack Islamic State positions at the strategic Syria-Iraq border crossing of Abu Kamar on Monday.

Why US Diplomats Urge Obama to Fight Assad Instead of Daesh in Syria
Giraldi said Russian President Vladimir Putin had repeatedly offered to cooperate with Obama over Syria and other Middle East security issues, and was still willing to do so in order to ease US-Russian tensions.

"I honestly believe that Putin would be willing to play along as he is genuinely disturbed at the Russia-bashing going on in the West and in Washington, DC in particular. Putin is the only adult in the room, I fear," Giraldi noted.