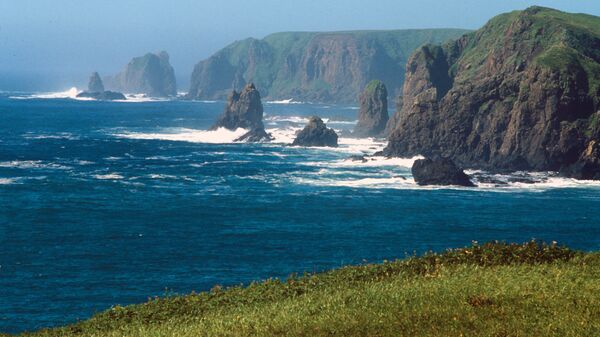 © Sputnik / Alexander Liskin
/
Go to the mediabank
Subscribe
International
India
Africa
Construction of the Russian Navy’s Pacific Fleet base on Matua in the Kuril Islands chain will begin as soon as this year, a military source told RIA Novosti on Wednesday.

Two months ago, the Defense Ministry along with the Russian Geographical Society sent a research expedition to Matua Island.

On May 6, Russian President Vladimir Putin met with Japanese Prime Minister Shinzo Abe. Japan once again brought up the issue of the Northern Territories, the four islands in the Kuril chain, disputed by Tokyo. As a result the talks, Abe said that Tokyo offered a "new approach" on the issue.

Lavrov: Russia Will Neither Give Kurils to Japan Nor 'Beg' for Peace Deal
The construction of a new naval base is not linked to the Kuril issue because Matua is not one of the islands claimed by Japan, Mikhail Alexandrov, a military analyst the Moscow State Institute of International Relations, told Svobodnaya Pressa.

However, in the future the base will be of military and strategic importance. An airfield will be constructed at the base. Theoretically, it could be used for Russian Tu-22M3 long-range bombers capable to carry Kh-101 long-range cruise missiles. Thus, Russian long-range bombers will be capable of accomplishing tasks of the strategic aviation.

Russia
Russia’s Deployment on the Kurils Signals Severe Limitations for US in Asia
This will enhance Russia’s capabilities of strategic deterrence of the United States and NATO, he said.

The base will also play an important role in deployment of Russian missile-carrying nuclear submarines, the analyst pointed out. Aircraft deployed to the base will be capable to track US submarines in the region.

Alexandrov also said that a new Russian base in the Kuril chain is unlikely to fuel tensions between Moscow and Tokyo.

"Russia already has bases on the Kunashir Island and Sakhalin. Of course, Japan won’t like a new Russian base in the region. Earlier, some of the Japanese political elite wanted to pressure Russia to return the territories, but now the situation is changing," he said.

The analyst also stressed that Russia is conducting a well-weighed policy on territorial disputes in the region, including over the Spratly Island claimed by six countries.

"Russia has insisted that the Spratly dispute should be resolved only by the parties to the conflict. However, the US in interfering in the situation and prompting Vietnam and Philippines to fuel tensions with China. In this situation, Moscow should give political support to Beijing," Alexandrov said.

Vasily Kashin, senior research fellow at the Moscow-based Higher School of Economics, suggested that the fact that a new base will be not be situated on one of the islands claimed by Japan may be a signal of a compromise between Russia and Japan.

"The decision to build a base on Matua was surprising. In the Soviet period, the island was not actively used by the military. Only a small brigade of border troops was deployed there. My assumption is that there may be a compromise on the Kuril Island. It can’t be ruled out that some forces would be redeployed from southern islands to Matua. The compromise may be the demilitarized status for the Northern Territories," he said.