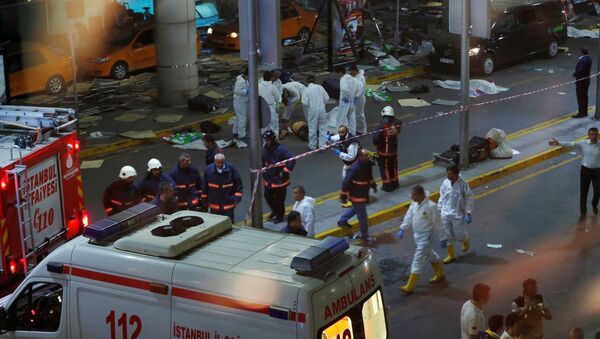 Turkish Prime Minister Binali Yildirim said that three suicide bombers participated in the attack. Initial indications suggest that Daesh, outlawed in Russia, is responsible for the terrorist attack, though the investigation is still underway, Yildirim said at a press conference Wednesday.

US Condemns 'Heinous Terrorist Attack' at Istanbul International Airport
Following the blasts, the Istanbul airport was totally evacuated and closed. Hundreds of flights were canceled. However, Yildirim, who attended the scene of events, said later that the airport had resumed its air traffic in a normal mode. Russia’s flagship airline Aeroflot canceled flights to and from Istanbul's Ataturk international airport on Wednesday.

According to media reports, the majority of victims of the terrorist attack are Turkish nationals, though there are several foreigners. According to the Russian Embassy in Turkey, a Russian national was wounded in the blast. The Ukrainian Foreign Ministry said that a Ukrainian national was killed in the attack and another one was injured.

Turkish President Recep Tayyip Erdogan strongly condemned the attack and called on the international community to enhance the fight against terrorism.

"The attack, which took place during the holy month of Ramadan, shows that terrorism strikes with no regard for faith and values. Nor do terrorists distinguish between their victims… We urge governments, parliaments, media and civil society organizations around the world, especially in Western countries, to take a firm stand against terrorism," Erdogan said in a statement.

The world leaders, including German Chancellor Angela Merkel and Belgian Deputy Prime Minister Didier Reynders, have condemned the attack and expressed deep condolences to the people of Turkey.

On June 29, 2014, the notorious Daesh declared its caliphate.