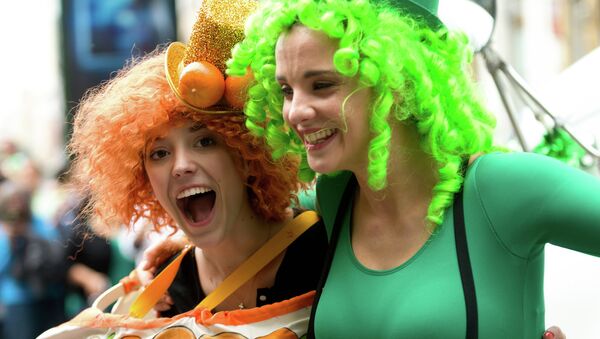 Many took to social media after the results were announced on June 24, pointing out the queues that had formed at the passport office in Dublin.

Look at the Queue outside the Irish passport office #Brexit pic.twitter.com/jcTqbJ1JAo

Google also announced a huge surge in people searching for ways to get an Irish passport on Friday morning.

+100% spike in UK searches for "getting an Irish passport" after #Brexit votehttps://t.co/qyssi0v91x pic.twitter.com/aUdHplLMaS

Many post offices across Northern Ireland and Ireland have been running out of passport application forms due to the unusually high demand.

So here's where we're at. This is the central post office in Belfast #brexit #EURefResults pic.twitter.com/YiZsSID3kU

The Irish Department for Foreign Affairs and Trade (DFA) is keen to debunk the idea that the passport office is being overrun, however, telling Sputnik that:

UK citizens with Irish parents or grandparents are eligible to apply for Irish citizenship, an entitlement that the DFA says remains "unchanged as a result of the referendum." Though many UK citizens without Irish heritage have been desperately trying to find a way to claim eligibility, in order to maintain their EU citizenship.

I refuse to believe that this surname doesn't entitle me to an Irish passport.

"A lot of friends on my social feeds are getting Irish passports, and I believe they've taken on 200 extra staff to deal with those extra requests. I myself am now an Irish passport holder as of recently, so I think I'm still an EU citizen for the moment."

UK citizens born in Northern Ireland before 2005 are entitled to apply for Irish passports and hold dual citizenship, though perhaps one of the more surprising individuals telling those in Northern Ireland to apply is Democratic Unionist Party MP, and prominent Leave campaigner, Ian Paisley.

My advice is if you are entitled to second passport then take one. I sign off lots of applications for constituents https://t.co/oWoiVIFF8A

The DFA is encouraging people not to rush out to apply for passports, emphasizing the fact that the UK will remain in the EU for a period of time as negotiations continue.

"It is important to note that while UK voters have voted to leave the EU, this process will take some time and UK passport holders continue to enjoy the rights of EU citizens until a formal exit occurs. Under the Treaties, it is envisaged this is a process that will take at least two years."

@kieran_walshe I've done exactly the same today. I think the Irish Embassy staff in London are going to be overwhelmed this week.

Though it doesn't look likely that the public will pay heed to these announcements, and now many embassies are fielding record numbers of requests.