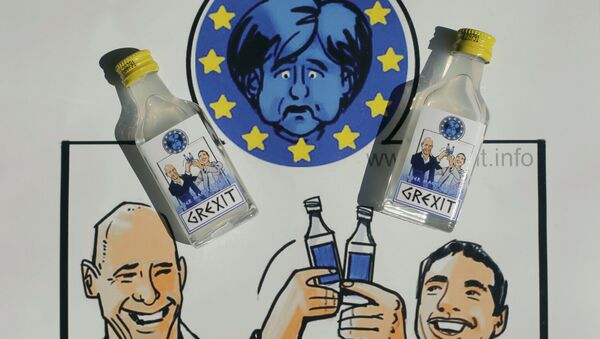 The summer of 2016 has been dominated by Brexit and now the British public has decided to leave the European Union. The future of the UK's relationship with the EU is in Brussels' hands.

Forget Brexit, Grexit: EUexit on Cards Amid Rising Euroskepticism
However, it was only a year ago that the worrying word on the European street started with a G not a B — with a Grexit looming large if Greece failed to impose austerity measures in return for a bailout from Brussels.

The spotlight finally shifted away from Greece and a possible Grexit when the UK Prime Minister David Cameron called an In-Out referendum on Britain's membership of the EU in February 2016, offering respite to the Grexit rhetoric which has been rumbling on for the last few years.

It's not rocket science
EU will want to make UK suffer, in order to discourage others — just as it did with Greece

​Britain was simply asked if it wanted to remain a member of the EU, Greece was asked if they wanted to adopt further austerity measures. In both events, the people said "No."

The Greek government ignored the people and accepted the demands of the Troika. Britain's Prime Minister accepted the results and resigned, leading to rising speculation that Greece could be next to exit the EU.

@tsipras_eu the greek people weighed in
You and the eu bosses ignored them. Shame on you

​However, quick to diffuse any tensions, Greek finance minister Euclid Tsakalotos told the government that despite the UK's Leave campaign generating "ambiguity and uncertainty" in Europe's economies, leading to a debate on "centrifugal forces" across European Union member states, there was no issue with Greece following in UK's footsteps.

Elsewhere on social media, the absence of a Grexit from the headlines came as a relief.

#Brexit really is the new #Grexit we'll spend years talking about it and it may not even happen.

​Meanwhile, a poll conducted by the research unit of the University of Macedonia suggested that 50 percent of Greek people are worried about the implications of a Brexit, compared to 28 percent who don't think it will make much difference.

​Greek Prime Minister Alexis Tsipras told state television that "the EU has taken a blow" following the decision by a majority of voters in the UK to leave the EU. "The decision is going to be respected, but it shows an identity crisis within Europe."

​"The signs have been there for a long time. The growth of the far-right was the sign of this development. The mismanagement of the refugee crisis, the closed borders, the austerity, the denial of sharing responsibility had all shown the crisis within the European project."

A crisis, now on Britain's doorstep, not Greece's as it tries to navigate its negotiations with Brussels, and keep the rise in extreme right-wing rhetoric on the streets of Britain, at bay.

I thought the world had learned a lesson after two World- and one Cold War #brexit #trump #rightwing pic.twitter.com/99fwYGiVWQ