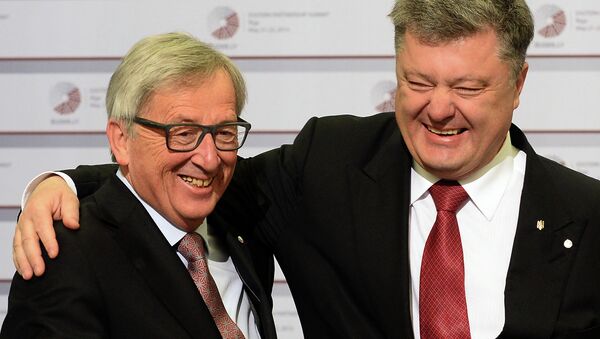 © AFP 2022 / JANEK SKARZYNSKI
Subscribe
The results of Thursday's Brexit referendum on the United Kingdom's membership in the European Union have sent waves of shock and disbelief throughout Europe and around the world; now, Ukrainian politicians are trying to spin the news into a golden opportunity for Ukraine to take Britain's place in the supranational union.

On Thursday, the United Kingdom held a referendum to determine whether or not the country should leave the EU. According to the final results, 51.9% of voters, or 17.4 million people, decided to support Brexit, while about 16.1 million opposed it.

Commenting on what was clearly a political and ideological defeat for the European project, Ukrainian politicians have tried to put a brave face on things, some even suggesting that Ukraine, which has been trying to join the supranational bloc for nearly two-and-a-half years now, might actually take Great Britain's place in the bloc.

Vekhovna Rada lawmaker Hanna Hopko was most blunt, pondering on her Facebook page whether "with Britain leaving, will Ukraine come in to save Europe as a continent. Berlin must play a proactive role: having lost Britain, the EU must gain Ukraine."

Billionaire Investor George Soros Warns of EU Dissolution Amid Brexit
Having said that, Hopko also warned that euroscepticism inside Ukraine itself will inevitably grow if Brussels fails to provide Kiev with the long-promised visa-free regime in the nearest future. "The world is changing. If we do not consolidate, we may find ourselves in the wilderness," she said.

For his part, Odessa Region Governor Mikheil Saakashvili wrote on his own Facebook page that he is confident that Brussels will ask Ukraine to join the EU in the UK's place if and when the country really becomes needed by Europe.

The disgraced former Georgian president suggested that in order for the EU not to 'drop' Ukraine, Kiev must commit to real reform. "We have to be genuinely needed in Europe, and then we will not be traded for, but will be asked to join the European Union in the UK's place," Saakashvili said.

At the same time, the governor admitted that "after the British referendum, Europe is entering a period of weakness."

"I believe that in spite of the results of the referendum, the UK remains in a united Europe, and will defend common European values," Poroshenko said. In his view, the EU must find "a way into the hearts of the eurosceptics, so as not to give any chance [of success] to the opponents of the European integration project and their generous sponsors."

Expert: No Chance for Second EU Referendum Petition
Just as important, in the president's view, was the notion of Europe remaining united against so-called 'Russian aggression.' "I hope that sanctions against Russia as an aggressor nation will continue," Poroshenko emphasized.

For his part, Vladimir Aryev, the head of the Ukrainian delegation to the Parliamentary Assembly of the Council of Europe (PACE), was more skeptical. "This [Brexit] is an earthquake, the consequences of which will take a long time to sort through. It is entirely possible that the sanctions against Russia will gradually begin to be withdrawn, while the visa-free regime for Ukraine, Georgia and Turkey will be postponed for an indefinite period," he warned.

Meanwhile, Foreign Affairs Minister Pavlo Klimkin insisted that the results of the Brexit referendum will not in any way affect the liberalization of the EU visa regime with Kiev, stressing that the only condition for a visa-free regime is the fulfillment of the requirements set forth by Brussels.

For his part, Dudchak recalled that for Ukraine's post-Maidan leaders, European integration is more than just a political project. For them, he suggested, "it is some kind of pagan cult. For authorities in Kiev, it is important simply in and of itself. Integration is not even something that must actually be achieved; it can remain simply as a movement 'going somewhere'. The statements of Ukrainian politicians are foolish, funny, and make one feel ashamed. It's a good thing that Europe does not hear about such statements, and that they're intended mostly for domestic consumption."

Ukraine, Moldova Disappointed by Results of UK's EU Referendum
"The leaders of the Maidan cannot admit that all of the rhetoric under which the coup d'état took place is absolutely meaningless," the analyst noted, speaking about the events of February 2014 which led to the overthrow of the Yanukovych government. "Indeed, one has to be a brainless politician to confuse a 'goal' and the 'means toward achieving a goal'. Membership in any organization cannot be an end in itself. Membership can only be a means to an end. The main objective of the authorities should be to improve the standard of living, sustainable development and the security of its citizens."

Yet, as Svobodnaya Pressa columnist Dmitri Rodionov pointed out, commenting on the results of Brexit, as "Britain gracefully leaves the sinking ship of a 'united Europe'," Ukraine, for over two-and-a-half years now, has "been attempting to climb aboard, destroying their own sovereignty, tearing their economy to shreds and killing tens of thousands of their own citizens" in the process.

Asked to comment on Poroshenko's proposal that British authorities should simply ignore the referendum results, Dudchak noted that the president seems "genuinely not to understand that not every country can simply ignore the opinion of its people when it comes to the fate of their nation."

"For Ukrainians," he added, "Poroshenko's comments are not surprising; people have become accustomed to his and his team's view that the opinion of the people means nothing."

As for other Ukrainian politicians' hopes that Ukraine could 'take Britain's place' in the EU, Dudchak suggested this was an absurd proposition. "Europe clearly does not need for Ukraine to take Britain's place. This is not a sports team, which must have a certain number of players. Europe will focus on its own problems. Perhaps we will soon hear about initiatives to hold similar referendums in other countries. Ukraine's meddling, meanwhile, does nothing but annoy Europe."

Brexit Hits the West's Establishment Below the Belt
As for Ms. Hopko's warning that an EU failure to grant Ukraine the much-coveted visa-free regime will result in growing euroscepticism, the political analyst suggested that actually, Europeans could care less about Kiev's threats. "Europe does not care about the opinions of Ukrainians. Whether or not Ukrainians become eurosceptics does not concern Europe. This is a problem only for Ukraine and its citizens. But Kiev has a serious problem – the guidelines that Maidan pushed onto Ukraine have now been smashed to smithereens, and it has turned out that Ukrainians were pushed into a dead-end."

"All sorts of fairy-tales can be made up, but concealing the results of Brexit from Ukrainians is impossible, as much as Poroshenko would like to do so. And the referendum results show that Europeans do not see a future in a 'united Europe'," Dudchak concluded.

For his part, Stanislav Byshok, a political commentator and analyst at the Commonwealth of Independent States Election Monitoring Organization (CIS-EMO), suggested that the results of Brexit are an important blow for Maidan supporters.

How Brexit Vote May Affect the Outcome of US Presidential Race
"In the eyes of a significant part of Ukrainian society, the legitimacy of the 2014 coup d'état, and that of the authorities that came out of it, rests on three pillars. The first was the need to get rid of the corrupt regime of Viktor Yanukovych. Second was the moral right to exact revenge for the heroes of the 'Heavenly Hundred'…Third was the speeding up of Ukraine's European integration."

"What is happening now to these pillars?" It has turned out, Byshok noted, "that Yanukovych's regime proved to be no more corrupt than what came to replace it." Meanwhile, "the initial belief, growing out of media propaganda, that the 'Heavenly Hundred' were killed by Yanukovych's snipers, is also becoming more and more illusory. What's left is the last pillar – the idea of European integration."

Now, following Brexit, "Ukraine's European integration too is becoming more and more of a distant dream," the analyst emphasized. "However, in the rhetoric of mainstream politicians, the idea is still very much alive. In this regard, all events taking place in the European Union, especially those of a large scale, such as Brexit, are interpreted in the context of the possible European prospects for Ukraine."

Meanwhile, the wave of euroscepticism which has become popular throughout the EU's wealthier countries threatens Kiev's European aspirations. "One of the main motives for rich countries to withdraw from the EU is their reluctance to subsidize poorer countries of the European periphery. The motive for poor countries to join, meanwhile, is the reverse: they want to be the recipients of financial assistance from rich countries or, at least, to gain access to their labor market."

US Worried Brexit 'Could Lead to Anti-Americanism' Among European Countries
In this sense, Byshok suggested, paradoxically, the steadily developing, investor-friendly Yanukovych government "was much more interesting to Brussels than contemporary Ukraine, even disregarding Brexit." On the other hand, he added, "Washington's interest in Ukraine will remain so long as Kiev continues to serve the role of obstacle to the normalization of relations between Russia and Europe."

Ultimately, the analyst noted, it's not Ukraine's ongoing political and economic crisis, nor the civil war in the country's east, which helps to drive euroscepticism in Europe, but the impact of the crisis on European-Russian relations. This, he suggested, has led to mutually disadvantageous sanctions.

"Eurosceptics are called the natural friends of Russia, and there is a hint of truth to this suggestion. Political parties campaigning for the return of sovereignty of their countries in domestic and foreign policy understand that in a globalized world, no one can go it alone. In this sense, Russia is seen as an obvious center of power with which to strengthen cooperation, at the very least in order to reduce dependence on Washington and Brussels."