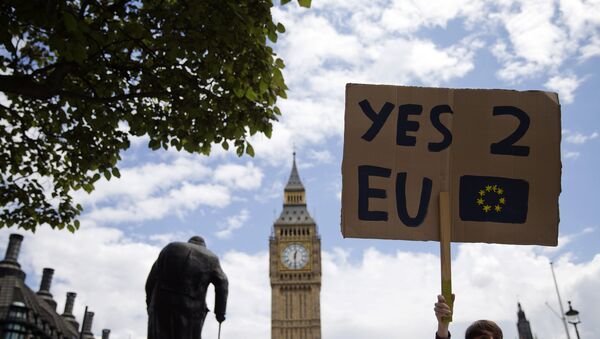 A petition for London to leave the United Kingdom and join the European Union as a response to a UK exit from the bloc has gained over 150,000 signatures.

MOSCOW (Sputnik) — Started on Friday on the Change.org website as a response to the official results of Thursday's Brexit referendum, in which over 50 percent of UK voters voted in favor of leaving the European Union, the petition has gathered over 155,000 within less than two days and continues to rapidly gain signatures.

Just seen this at my bus stop outside my flat in Hackney making a case of London Independence. #referendum pic.twitter.com/5jYmw5g03z

​Another petition, launched on the UK parliament website, called on the UK government to hold a second referendum as the vote gathered less than 60 percent support for Brexit with a turnout less than 75 percent. The petition has gathered some 2,500,000 signatures so far and will reportedly be debated in the House of Commons.

"London is an international city, and we want to remain at the heart of Europe. Let's face it — the rest of the country disagrees. So rather than passive aggressively vote against each other at every election, let's make the divorce official and move in with our friends on the continent. This petition is calling on Mayor Sadiq Khan to declare London independent, and apply to join the EU — including membership of the Schengen Zone," the petition reads.

According to the final results of the referendum, 51.9 percent of voters, or 17.4 million people, decided to support Brexit, while about 16.1 million opposed it.

Yesterday I was British. Today I'm a Londoner. #WhatHaveWeDone #LondonIndependence