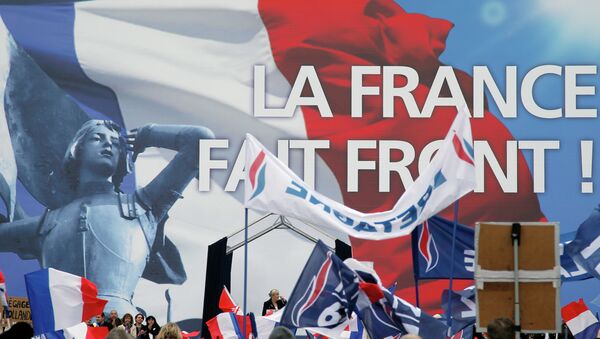 Jean-Marie Le Pen, French MEP and founder of the right-wing National Front party, is now facing action from the European Parliament over salaries "unduly" paid to assistants who were not working on European Parliamentary business.

A spokesperson for the European Parliament told Sputnik that Le Pen's refusal to pay back the funds had led to his salary being restricted:

"The Parliament has begun in May to seize half of Mr Le Pen's salary, the entire GEA and half of his per diem (daily allowance) for the days he attends work for the Parliament.

"Mr Le Pen needs to pay bay [SIC] 320,026.23 euros to the Parliament because of a parliamentary allowance unduly paid for one assistant. Parliament went through all the proper procedures (asking for clarifications, etc.) and decided in the end that this sum of money needed to be paid back. Mr Le Pen has refused and therefore Parliament has now taken this measure."

An investigation was launched in 2015 by the European Anti-Fraud Office, commonly known by French acronym OLAF, into thirteen allegations of fraud by MEPs who had taken salaries for assistants from 2009 to 2014, with no evidence of the staff ever having worked on official business.

Many of the allegations were dismissed immediately due to insufficient evidence, but according to a document obtained by AFP, Klaus Welle, Secretary General of the European Parliament, said that Le Pen gave "neither an explanation for nor any evidence of parliamentary assistance work," and should therefore reimburse the money "unduly" paid out for his member of staff.

Le Pen's National Front colleague Bruno Gollnisch is also facing salary restrictions in order to repay around US$430,000 (380,000 euros) also paid to an assistant that was not working on parliamentary business, bringing the party's total to around US$800,000.