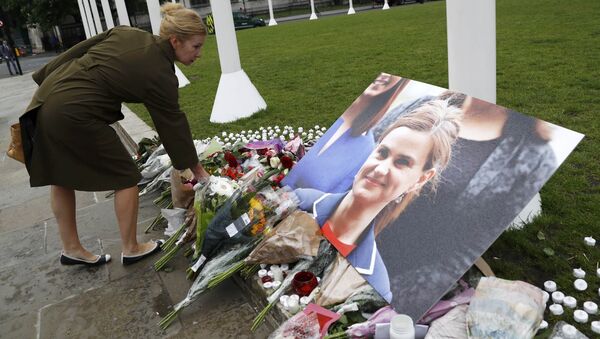 © REUTERS / Stefan Wermuth
Subscribe
The presumably politically-motivated assassination of Labour MP Jo Cox is a dire reflection of the controversial nature of the upcoming Brexit referendum, as well as wider social discontent among the British public.

UK Labour MP Cox Confirmed Dead After Being Stabbed and Shot
Kristian Rouz — British Labour Party MP Jo Cox was fatally shot in her district in West Yorkshire on Thursday by alleged Brexit supporter Tommy Mair, leading to the suspension of both ‘In' and ‘Out' campaigns just a week before the June 23 referendum. However, it remains unclear whether the heated Brexit debate was the primary motivation of the 52-year-old assailant, who was reported to have struggled with psychological issues. Nonetheless, the incident adds a brand new dimension to a contentious debate, which has divided opinions in the UK unlike no other in recent memory.

Earlier this week, several polls, including one that was later dismissed as a hoax, indicated wider popular support for the UK leaving the EU on June 23 for first time since both campaigns commenced, despite most of the British political establishment, including Tory PM David Cameron and head of the shadow cabinet Jeremy Corbyn, having repeatedly voiced support for the ‘In' campaign. Massive speculation will accompany the grieving, and many contend the Jo Cox assassination will color attitudes towards the referendum, unless it is called off. It is a grim sign of public discontent over the complexity of the issues the UK is facing, including the perceived risks posed by immigration, economic anxieties, threats to national security, and violent political and religious radicalism.

"We are suspending all campaigning for the day," the official ‘In' campaign tweeted shortly after the incident. "Our thoughts are with Jo Cox and her family."

The ‘Out' campaign also put their efforts on hold. The assailant was reported to have shouted "Britain first", the name of one of the most radical pro-Brexit groups.

While the financial risks accompanying a Brexit scenario are rife, as noted by the Bank of England (BOE) on Thursday, maintaining the status quo, as advocated by the ‘In' campaigners, would be the most appropriate for most of the UK's establishment. However, the 'Out' campaign is finding support mostly amongst the frustrated, dismayed and occasionally dispossessed English working class, which has suffered from the negative spillovers of the expansion of the financial sector and services, as well as the declining global competitiveness of the UK's traditional industries like iron and steel, and shipbuilding, among other things.

Is there a possibility that the MP Cox assassination might snowball into full-scale class warfare, between groups struggling for their vision of the future of the British economy and governance? Although this is hardly the case, an escalation in violent political radicalism might be a possibility.

The 'Out' campaign's de facto leaders, Nigel Farage, head of the UK Independence Party (Ukip), and Boris Johnson, former mayor of London, both voiced their sympathy for the Cox family and made it clear that political violence is inappropriate.

Deeply saddened to hear that Jo Cox has died. Sincerest condolences to her family.

​Johnson is widely speculated as the most likely candidate for the PM office should the Brexit occur.

Despite a heavy backlash over the incident among the ‘In' supporters on social media (with some users going as far as to claim that there is "blood on the hands" of the Brexit supporters in general), both Johnson and Farage are determined to act within the framework of the existing political procedures. They aren't revolutionary leaders, explicitly or covertly.

However, the hazard of politically-motivated violence possibly escalating is now prominently obvious — and such a hazard emanates from smaller and less public organizations, which almost lack any representation in the UK's official political landscape.

Britain First, the far-right political group whose name the assailant invoked as he took MP Cox's life, iis reported to have training camps in remote and secluded regions of the UK. Although it denies such allegations, Britain First and other similar groups, which are small in number but adamant in their conviction that direct action is a method of achieving their goals, might indeed take political violence to a new level. The question is whether a wider group would become more accepting of the more direct methods advocated by the extremists.

The most appropriate assessment would be to say that the MP Cox assassination makes things complicated for both the ‘In' and ‘Out' supporters. The entailing controversy puts everyone under suspicion of possible involvement, undermining the overall level of mutual trust in the UK's politics.

Opinions on Brexit are still divided, indicating, however, the UK is leaning to vote ‘Out'.

"Until this morning I would have said to you that on the balance of probabilities, ‘Remain' were the favorites," John Curtice, Glasgow-based Strathclyde University's professor of politics said as reported by the BBC. "We no longer have a favorite in this referendum. There has to be a serious possibility that we will vote ‘Leave."'

A Brexit scenario would have "adverse spillovers to the global economy" through "financial market and confidence channels," they added.

MP Jo Cox' Labour Party generally supported the ‘Stay' campaign. MP Cox herself was leaning ‘In' as well, as indicated by her recent statements, yet, she also voiced moderate concerns regarding immigration.

"Immigration is a legitimate concern, but it's not a good reason to leave the EU," MP Cox told the Yorkshire Post on June 10.

000000
Popular comments
"UK Labour MP's Murder Could Heat Up the Already-Incendiary Brexit Issue" And that was the intention wasn´t it? Poor woman, no matter what her stance from "take in and save all rapefugees" to the fascist union of €USSR, nobody deserve to be murdered. But as we have seen before and recent US and Obongo´s intervening in Brexit, US and their vassals would go to any length to preserve the US strangle hold over the Eurofags and the EU, even murder. This was in my opinion an all-to-convenient in the last minute attempt to save that and Cox just happened to be their choice.