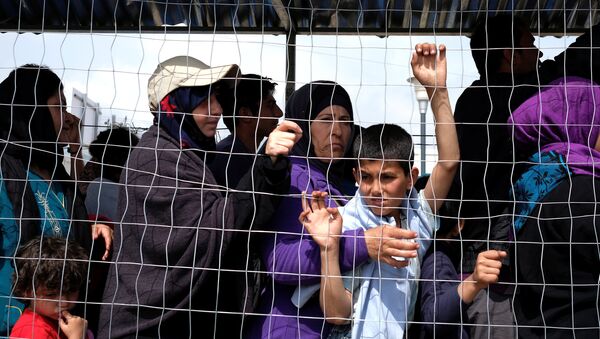 The controversial EU-Turkey migrants deal - under which "irregular" migrants from Greece are relocated to Turkey and Turkish citizens are allowed visa-waiver access to the EU - has hit the buffers because of the "dysfunctional EU approach to refugee crisis," Sputnik has been told.

The deal — brokered in March — was designed to encourage Turkey to stem the flow of migrants crossing from Turkey an into Europe via the Aegean and Mediterranean seas and via the so-called West Balkan Route.

As part of the deal, "irregular migrants" — those refused asylum — who arrived in Greece after March 20, would be returned to Turkey — on a one-for-one basis — for Syrian refugees from Turkey being relocated to EU member states.

Contingent with the deal was the agreement that the EU would speed up Turkey's accession into the EU and that "the visa liberalization roadmap will be accelerated vis-à-vis all participating Member States with a view to lifting the visa requirements for Turkish citizens at the latest by the end of June 2016."

However, Turkey also had to fulfill a number of other commitments, chiefly on human rights, documentation, security and refugee humanitarian needs. But the stumbling block has been over Turkey's refusal to tighten anti-terror laws that critics say have been used to silence journalists and media organizations. Moreover, Recep Tayyip Erdogan has lifted immunity from prosecution for opposition parties in a move many see as a threat to democracy.

Dimitris Avramopoulos, the European Commissioner for Migration, Home Affairs and Citizenship Wednesday (June 15) said the June deadline for the visa deal would pass as more work was needed on Turkey meeting the EU requirements. "The final time for visa travel will depend on both when Turkey completes work on the remaining benchmarks and when the co-legislatures ultimately take their decision," he said.

​European Parliament Green party asylum spokesperson, Jean Lambert said: "The analysis and proposals released by the Commission today underline the dysfunctional nature of the EU's response to the refugee crisis. Returns to Greece under the Dublin system have long been suspended and the Greek system continues to be overwhelmed. It is unbelievable that the Commission is proposing to reinstate returns to Greece against this background, particularly given the painfully slow pace of relocation.

"The snail's pace of progress resettling and relocating refugees is clearly the fault of EU governments, which are refusing to accept their responsibilities in managing this humanitarian crisis. Less than 5% of the original commitment has so far been fulfilled. This is a damning indictment of the EU collective response, all the more as they have further reduced their commitment in the context of the highly controversial agreement with Turkey."